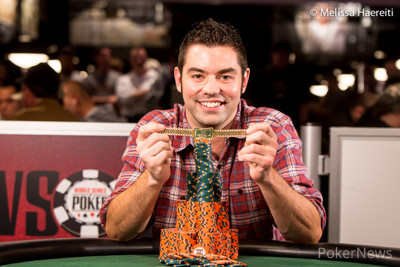 Entering Event #48: $1,500 Pot-Limit Omaha Hi-Low at the 2014 World Series of Poker, Tyler Patterson boasted nearly $1.2 million in live tournament earnings, 18 WSOP cashes, and three prior WSOP final tables. Despite all of that, Patterson had yet to wrap a bright, shiny gold bracelet around his wrist. Now that the event has been completed, Patterson can officially call himself a champion as he outlasted a field of 991 players to win the $270,992 first-place prize.

Eleven players remained heading into Day 3 of this event, with Patterson right in the middle of the pack. After scooping a big pot early on in which he crippled Dylan Wilkerson, Patterson shot into the chip lead and he didn't stray too far from the top for the rest of the day.

Wilkerson ended up finishing in ninth place, and then J.R. Flournoy fell in eighth. Bracelet winner Derek Raymond hit the rail in seventh, and he was followed out the door by four-time WSOP champion and 2007 Player of the Year Tom Schneider in sixth place. Gary Kosakowski headed out the door in fifth, and then Jeff Madsen, who was searching for his fourth piece of WSOP hardware, was eliminated in fourth.

The final three players had locked up over six figures, and then it was Cody Crawford to fall first during three-handed play. This set up the heads-up battle between Patterson and two-time WSOP champion Scott Clements, but in the end, Clements just couldn't overcome the powerful Patterson. Despite fighting hard at the end, Clements fell after approximately six and a half hours of play at the final table.

Clements finished runner-up and just missed out on his third gold bracelet, but the $167,686 in prize money should help ease the pain a bit. As for Patterson, he was able to get that sweet taste of WSOP gold on his lips and add $270,992 to his pocket. Congratulations to him and all the winners from Event #48. 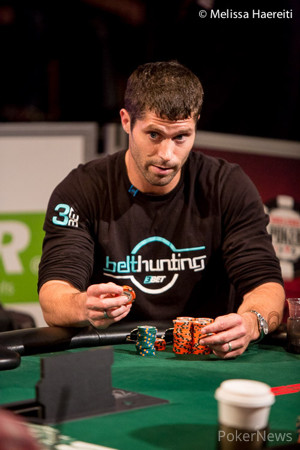 Scott Clements limped on the button, Tyler Patterson raised the pot to 150,000 in the big blind and Clements called.

fell on the turn and Patterson checked. Clements bet 250,000, Patterson check-raised the pot to 800,000 and Clements went into the tank for about 10 seconds before before he reraised all in for 1.58 million. Patterson called.

Clements was ahead for the high with kings and sevens, while also holding a flush draw. Patterson held the nut low draw, an open-ended straight draw and a better flush draw than Clements.

Patterson's rail exploded as their man hit a winning flush, ending Clements' run for a third bracelet with a runner-up finish worth $167,686.

, and Patterson had the

, allowing for the two players to chop up the pot.

Clements Doubled with a Wheel

On the button, Tyler Patterson raised to 125,000. Scott Clements called from the big blind, and the flop came down

. Clements was able to scoop the entire pot with a wheel, and he doubled to nearly 1.5 million.

From the button, Scott Clements limped in. Tyler Patterson raised to 150,000, and Clements called to see the

land on the turn. Patterson bet 375,000, and Clements called. The river was the

Scott Clements limped in from the button, and Tyler Patterson checked from the big blind to see the

flop. Both players checked, and the turn was the

Clements Back Over One Million

Scott Clements called on the butt, Tyler Patterson raised to 120,000, and then Clements reraised to 360,000. Patterson called, and the flop produced the

. Patterson checked, Clements bet all in for 640,000, and Patterson folded.

Scott Clements limped the button, and Tyler Patterson raised to 120,000. Clements called, and the flop came down

The board finished with the

on the river, chopping the pot between the two players. Clements had the high with two pair, fives and fours, and Patterson took the low with his ace-six.