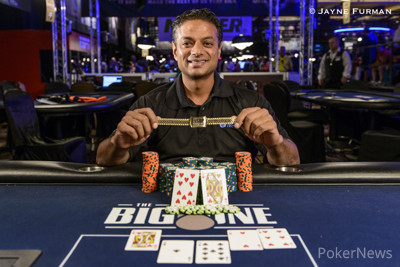 It was the last $1,500 No-Limit Hold'em tournament of the year at the 2014 World Series of Poker and that fact alone was enough to create an impressive turnout of 2,563 players. This was by far the biggest $1,500 NLHE tournament of the WSOP and it created a prize pool of $3,460,050. It concluded with an epic heads-up match that went nearly five hours in length, with Salman Jaddi emerging with the $614,248 first-place money and his first WSOP bracelet.

. Hall had a huge lead after a flop of

but Jaddi would hit a

"I didn't want to say 'one time' out loud, but that's what I was thinking," Jaddi said, sitting at the table, unable to believe what had just happened. "I feel like I played awesome heads-up. Get lucky along the way sometimes. That's how it goes."

Jaddi explained some of his thought processes at the final table afterwards: "Four handed, I sensed that it would be Brandon and I going heads-up. I tried to play off of my image and steal some chips. Once we were heads-up, Brandon kept value betting thin and I was able to pick up some pots. Once I got the lead, I came back and played small ball with him." Jaddi went on to add "that if Brandon would have taken the chip lead today, I thought I'd be in trouble so I kept trying to apply pressure to make sure I kept the lead."

His heads-up counterpart, Hall, would take out the remaining two players, Guillauma Marechal (4th - $194,939) and Zach Gruneberg (3rd - $270,299) to get us to the beginning of what would be a marathon battle between the pair. Jaddi would start to pull away early in the match, getting to a more than 5-to-1 chip advantage at one point, but Hall would chip away and get things nearly back to even when the two decided to call it a night.

The new day then saw Jaddi pull ahead, but Hall would double-up once to regain some momentum. Jaddi again took control, however, leading up to the final hand that would see him declared the winner.

Jaddi's last words were ones that all amateurs could relate to: "I'm a business owner, not a pro. I play for fun. Anyone has a shot to win this thing. I didn't play many hands, but somehow I ended up here. If I can do it, anyone can."

That concludes PokerNews coverage of Event #60: $1,500 No-Limit Hold'em. Thank you for following along and make sure to stay tuned as coverage of the Main Event will get underway on Saturday! 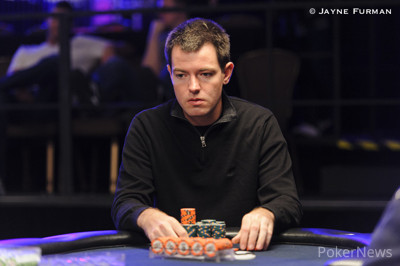 Hand #371: Brandon Hall open-shoved all in and it took only a moment for Salman jaddi to make the call, putting Hall at risk and the gold bracelet within his grasp.

. Hall kept the lead, but Jaddi did have some outs. The

fell on the turn giving Hall two pair, but Jaddi now had a flush draw as well.

on the river, giving Jaddi a flush and the victory.

Hand #367: Hall limped, Jaddi moved all in, and Hall gave it up quickly.

Hand #361: Hall called from the small blind and Jaddi checked his option. The flop came

Hall went into the tank for several minutes. Towards the end, while doing a chip trick with his left hand and shuffling four chips in his right hand, Hall looked towards the clock as if to see when the blinds would go up. Jaddi sat motionless and Hall eventually relented.

Jaddi said "You don't want to see," but showed, anyway — a bluff with

Win Your Way to the WSOP Main Event in the 25 Seat Scramble!

The $10,000 World Series of Poker Main Event is only a few days away, but there's still plenty of time to win a seat to the grandest tournament of the year. On July 5, WSOP.com in Nevada is guaranteeing 25 seats to the Main Event in the 25 Seat Scramble, a $215 satellite that begins at 5 p.m. PST.

If $215 is out of your budget, satellites to the are running for as little as $1.10. There's also one last $27.50 super satellite guaranteeing 10 entries into the 25 Seat Scramble running a few hours before the event:

Anyone can play, and anyone can win. Register for the 25 Seat Scramble on Saturday and take your shot at poker immortality!

flop, and Jaddi check-folded to a Hall bet.

Hand #356: Jaddi opened, Hall announced all in, and Jaddi mucked flashing the

Hand #357: Hall raised and Jaddi made the call. The dealer fanned out a

flop, and both checked to the

. Both checked to the

was delivered. Both checked to the

and it became the burn card. Hall called from the small blind and Jaddi moved all in. Hall quickly called and told his rail "the other one was an ace, too" as he turned over

making a Broadway straight on the end to double up to 4.75 million in chips.