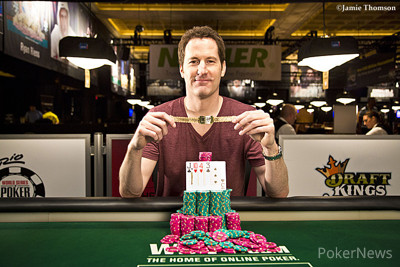 Event #64: $10,000 Pot-Limit Omaha Championship began two days ago with 418 entrants putting up $10,000, the last big buy-in event preceding the Main Event. After 29 one-hour levels, only one player was left standing. Pat Walsh (St. Charles, MO) topped the field and earned his first World Series of Poker bracelet to go along with the first-place prize of $923,379.

Walsh found himself near the top of the chip counts throughout the tournament. When Day 1 concluded, he was 16th in chips out of the remaining 132 players. After 10 more levels on Day 2, Walsh sat third in chips with 23 players remaining. His Day 3 path to the final table was relatively easy as by the time the final two tables were reached, Walsh held the chip lead. He continued chipping up from there, eliminating Daniel Hood in 15th place and scoring a massive double elimination, sending Tom Marchese and Alex Kravchenko to the rail in 11th and 10th place, respectively.

From there, Walsh held onto the chip lead for the entire final table until Javed Abrahams gave him a run for his money in the heads-up duel. Abrahams took the chip lead briefly and had a chance to close it out. Walsh got his chips in after the flop with the nut straight, but was an underdog to survive. However, Abrahams missed his many outs to close it out and 18 hands later Walsh emerged victorious.

Congratulations to Pat Walsh and thank you for following our hand-for-hand coverage of his victory.

Walsh held two pair (three pair, even), but had a lot of outs to fade as Abrahams held the top half of a wrap. The

turn kept Walsh ahead and when the

river fell, both players studied the board for a couple of seconds before shaking hands.

Hand #157: Javed Abrahams raised to 200,000 on the button and Pat Walsh called from the big blind. They checked to the turn of a

Hand #158: Walsh raised on the button and took down the pot.

and Walsh check-folded to a continuation bet from Abrahams.

Hand #160: Walsh limped on the button and Abrahams checked his option. They checked to the turn of a

river fell and Abrahams check-folded to a bet of 400,000 from Walsh.

board where Abrahams bet to take down the pot.

Hand #148 After checking his option in the big blind, Javed Abrahams check-folded an

Hand #154: It was Walsh's turn to win with a preflop raise on the button.

turn. More checks, and a

was the fifth community card. Abrahams bet 200,000 when checked to, and Walsh laid it down after some thought.

flop to take it down. 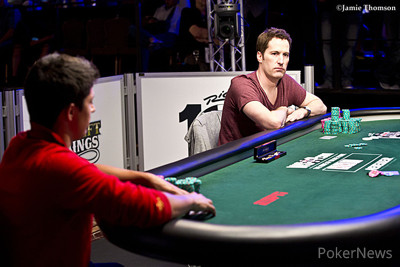 Walsh held the nut straight, but was an underdog to hold up against Abrahams wrap and flush draw. However, the

river were no help to Abrahams, locking up the double for Walsh.

Walsh's reaction to the massive double up? To calmly snack on his Planters bar.

was the river card. Walsh fired 600,000, and Abrahams quickly folded.

Hand #140: Walsh limped, and Abrahams checked. Walsh won with a bet on the

Hand #141: Abrahams min-raised the button and was called. Two checks followed the

Hand #142: The players checked down a

Hand #144: A preflop from raise from Walsh on the button was a winner.

flop, Abrahams called, and a

and and Abrahams check-called 300,000 from Walsh to see the

river completed the board and both checked again. Abrahams won it with

for jacks full of tens.

Hand #138: Pat Walsh raised to 160,000 on the button and Javed Abrahams called from the big blind. They checked to the river of a