After three days of Day 1 action, today signalled Day 2 of the 2012 Australia New Zealand Poker Tour (ANZPT) Queenstown Snowfest Main Event. Today took place in a pretty unique fashion where two separate Day 2 flights took place and then the fields combined later in the day. Of the 87 players who started the day with high hopes only a skilled 31 still had chips remaining at the end of the days actions, David Allan being the man who bagged up the most precious ceramic discs.

Day 2a began at lunchtime in New Zealand with 43 players taking their place on the felt. 2011 ANZPT Sydney Champion Michael Kanaan managed to finished that flight with the biggest stack after he won a significant pot against Antonin Duda.

was on the board and Duda called Kanaan’s bet on the river. Kanaan showed

David Wonson and Laurynas Levinskas were some of the others to make it through while the likes of Danny Chevalier, Ben Richardson and World Series of Poker bracelet winner Andrew Hinrichsen hit the rail at various points during the day.

Day 2b had 44 starters and of those 24 managed to make it through the three levels of play. Whilst no one managed to match Kanaan’s stack, a famous face in the crowd Billy “The Croc” Argyros did accumulate a decent stack over the period. He finished up with 75,000 chips but not everyone was as successful and the likes of James Honeybone, Leo Boxell and PokerStars Team Online Pro Roy Bhasin busted out of the tournament.

The remaining 47 played together for the first time at 19:30pm and there were three more levels scheduled for the evening. Current AZNPT Player of the Year Leader Anthony Aston was still involved but he he will not be part of the penultimate day's play because he got involved in a preflop raising war with Laurynas Levinskas that ultimately ended his tournament. Aston held

but his opponent was in the lead with pocket jacks, the board provided him no help as it ran out

and he exited from the tournament area.Despite helping himself to this substantial pot Levinskas would not survive the day.

By the time the dust had settled in Queenstown it was David Allen who ended the day as chip leader; with a stack of 280,000. Also still in are the aforementioned Kanaan; Argyros and Team PokerStars Pro Bryan Huang.

There are 31 players remaining, each of them hoping to add the NZ$110,600 first-place prize to their bankroll. Tomorrow will see the field cut down to a final table and the money bubble will burst so make sure you stay tuned to PokerNetwork for full coverage direct from the SKYCITY Casino in Queenstown. 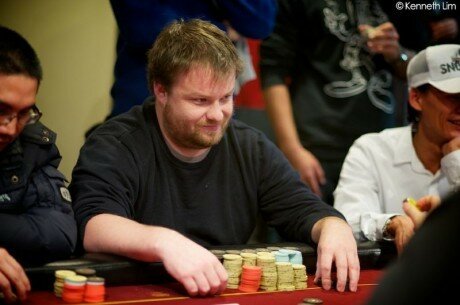