The 2012 World Series of Poker continued this past week with quite a few notable story lines. They included another near-victory by a woman in an open event for the first time since 2008, Phil Ivey making his fifth final table, and David "ODB" Baker final capturing an elusive WSOP gold bracelet. In the latest installment of Biggest Hands of the Week, we take a look at some of the notable hands from the past week of the 2012 WSOP.

Phil Ivey Denied at the Final Table Yet Again

In Event 35: $2,500 Mixed Hold’em, Phil Ivey made his fourth final table (and he went on to make his fifth days later) of the WSOP, and for the fourth time he was denied his ninth gold bracelet. Had he won one hand in particular, Ivey would have been in serious contention for the gold; instead, he ended up on the wrong end of a bad beat in the no-limit hold'em round. As reported in the Live Blog:

Action folded to Phil Ivey in the cutoff seat and he raised to 20,000. On the button, Samuel Golbuff reraised all-in for 159,000. The blinds folded and Ivey quickly called.

Ivey turned over the

and was way ahead of the

The flop came down an interesting

, giving Golbuff a pair and a straight draw, but keeping Ivey in front.

landed on the turn and Ivey was still in the lead, but a miracle

on the river gave Golbuff a six-high straight and doubled him up.

As the tournament director counted down that stack of Golbuff, all he could do was laugh at what had just happened while Ivey just stared blankly with his famous "Ivey face" and mouth dropped open as if to say, "Was that even real?"

The Original David Baker Finally Captures a Bracelet in Event 37

David Baker became the second player by that name to win a bracelet this year, though the one we’re referring to is often referred to as either the “Original David Baker” or “ODB.” His victory came over a 477-player field in Event 37: $2,500 Eight-Game Mix for $271,312.

His performance was impressive throughout, especially an epic comeback to beat Greg “FBT” Mueller in heads-up play, but it was all made possible thanks to a hand that happened on the final-table bubble when action was nine handed. As reported in the PokerNews Live Blog:

Donnacha O'Dea raised to 16,000 from middle position and received three calls. The

flop saw three checks to David "ODB" Baker on the button. He put out a bet of 50,000, which was enough to get Joe Couden to fold from the small blind. Mikal Blomlie then announced, "Pot," from the big, making it 214,000 total.

After O'Dea got out of the way, Baker stood up and asked how much Blomlie had back, which turned out to be 119,000. Baker thought for solid minute, cut out enough chips to put Blomlie all in, and then slid them into the pot. Blomlie called off and didn't like what he saw.

"Nice slow roll," Blomlie said, clearly frustrated. The rest of the table didn't seem to think that was the case, pointing out that a set of tens was the bottom of Baker's range in that spot. It didn't seem to console Blomlie as he watched the

Whether you consider it a slow roll or not, Baker wasn’t afraid to make a big call, one that constituted the vast majority of his stack. Had he been wrong, there is little doubt Baker wouldn’t have found himself with a bracelet around his wrist; in fact, he could have very well become the final-table bubble boy instead of Blomlie.

Midway through Day 2 of Event 38: $1,500 No Limit Hold’em, which attracted 2,534 runners and created a $3,420,900 prize pool, a controversial hand developed that brought into question whether or not Michael Borovetz angle shot Jim Collopy. Here’s the hand as documented in the live reporting blog:

A hand played out between Jim Collopy and Michael Borovetz that caused an awful lot of controversy and had the floor man making a very difficult decision.

The action had reached the river of an

Collopy was first to act from under the gun and he checked. Borovetz said, "Ten."

Collopy thought his opponent was declaring his hand value and opened

. The dealer mucked Collopy's hand and it was after this that Borovetz opened

Borovetz claimed he was betting 10,000, and argued that he wouldn't declare a ten as he had five-four. Collopy argued that at no point did Borovetz motion to bet or put any chips in on the river.

Isaac Haxton said it looked like a blatant angle to him, and a great "move" to remember for the future.

The floor was called and ruled in favor of Borovetz, but gave no clear indication as to why. We can assume that it was the dealer error that cost Collopy the pot, as he mucked his hand before Borovetz opened a winning hand that must be shown to collect the pot.

It seems the dealer’s premature muck of Collopy’s hand fueled the fiasco, but the result remained the same. Despite that, both Collopy and Borvetz cashed in the tournament, the former finishing in 64th for $6,773 while the latter took 17th for $21,689. With that said, Dung Nguyen had the last laugh as he ultimately won the bracelet and $607,200 first-place prize.

On Day 1 of Event 39: $10,000 Pot Limit Omaha saw some wild action and produced two memorable hands. The first was a quads-over-quads battle between Mohsin Charania and Mike Cameron:

When we reached Table 5, Mohsin Charania and Mike Cameron were heads up with the board reading

completed the board. Charania checked, and Cameron fired 16,500.

"Pot," Charania announced after thirty seconds or so. Cameron quickly re-potted, and Charania got the rest of his chips in the middle. Charania tabled

for quad eights, and to the astonishment of everyone, Cameron tabled

While it was an extremely interesting hand, it proved of little consequence in the grand scheme of things as both players failed to cash. With that said, one big hand from Day 1 that did have big consequences involved Joe Kushner, who ended up winning the hands and using his big stack to make a deep run into Day 3. Here’s the hand that help him do it:

Prior to seeing the

flop, John Juanda and one other player were all in while three other players all made the call and were still in action. Of those three, Brian Hastings and Joe Kushner were included.

Kushner was first to act on the flop and put out 45,000. Hastings was next up and raised all in. The third active player in the hand also called all in and here's what was revealed:

. On the turn, Kushner made threes full of aces and that held up to take down the entire pot. In the process, Kushner busted four players, including Hastings and Juanda, en route to 325,000 in chips.

"Four seats open!" yelled Mohsin Charania from the table. "If this was a shootout table, you'd be doing pretty well," he added. 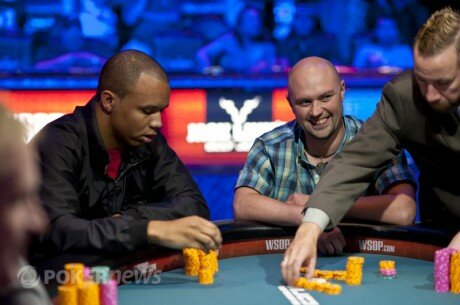