Over the next week, PokerNetwork will be taking a brief look at each member of the 2013 World Series of Poker November Nine. We’ll be moving around the table in seat order, and here’s a quick recap of the players we’ve covered thus far (click each to see their article):

Israeli native Amir Lehavot is the elder statesman of the November Nine at 38 years old and two months. Lehavot, who now resides in Weston, Florida, holds an engineering degree from the University of Texas at Austin, though it’s not being put to direct use as he has been a professional poker player for a number of years.

Since 2009 and prior to this result in the Main Event, Lehavot had amassed 12 World Series of Poker cashes totaling $818,414. That includes a win at the 2011 WSOP in Event #7 $10,000 Pot-Limit Hold’em Championship for $573,456 and his first WSOP gold bracelet. He defeated a stacked final table in that tournament which included McLean Karr (8th), Stephen Chidwick (4th), Sam Stein (3rd) and Jarred Solomon (2nd). That was Lehavot’s biggest career score, but of course the $733,224 he’s guaranteed for making the November Nine will surpass that.

Lehavot steadily built his stack throughout the first six days of the tournament before having a dream level of Day 7. In the span of two hours Lehavot grew his stack from 1.7 million to 17 million. He was able to do so in part by turning quads and doubling through James Alexander before eliminating that same opponent a short time later. Lehavot then eliminated Sergio Castelluccio in 14th place to chip up to over 30 million. He then went on to make the November Nine with 29.7 million, good enough for the second biggest stack.

Lehavot's seat at the table isn't ideal, but it's not terrible either. He's got Marc McLaughlin, the third biggest stack, to his direct left and chip leader JC Tran one seat after that. On the flip side, Lehavot has position on Ryan Riess, who has the fifth-biggest stack, and two of the shorter stacks. If one of those shorties were to shove, Lehavot will be in position to possibly wake up with a hand and pick up some chips. Regardless of his position, Lehavot has a bit of an edge over everyone but Tran as he has WSOP final table experience and knows how to close out a win.

Leading up to the final table, Lehavot, who conjures up images of Homer Simpson, was no doubt underestimated. He comes across as tight and passive, but that façade won't be there come November. Rest assured the rest of the final table will be aware of Lehavot's accomplishments and will have plenty of material to study from the hand history of his WSOP win to the broadcast of his WPT final table. Make no mistake, Lehavot is one of the most accomplished players at the final table and will be a force to be reckoned with. 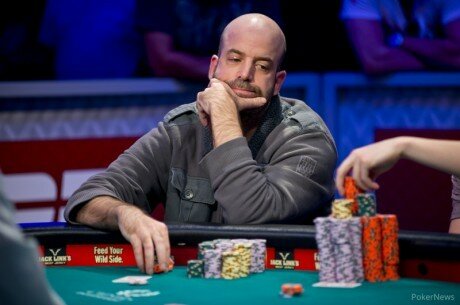