Over the next week, PokerNews will be taking a brief look at each member of the 2013 World Series of Poker November Nine. We’ll be moving around the table in seat order, and here’s a quick recap of the players we’ve covered thus far (click each to see their article):

In Seat 4 is 23-year-old Ryan Riess, who resides in Las Vegas by way of East Lansing, Michigan. A graduate from Michigan State University with a business degree, Riess is an up-and-coming poker pro that started out on the 2012-13 WSOP Circuit. Riess, who is the youngest player at the final table, first jumped onto the poker radar in October of 2012 when he finished runner up to Josh Williams in the WSOP Circuit Horseshoe Hammond $1,675 Main Event for $239,063.

Riess begins the final table fifth in chips, though less than 4 million separate him and the three players above him. Unfortunately for Riess, he’s got a rather tough seat draw. The three players to his right are on the shorter side, meaning they’re more likely to shove. On the other side to his left, Riess has the three big stacks, all of who could play back at him at any moment. It's the old adage of "between a rock and a hard place" at the final table for Riess.

With all that said, Riess is adept at overcoming adversity. He finished Day 1a of the Main Event with a healthy stack of 72,250, but Day 2a was rough for the young player — he only added 3,150 to his stack. He got things back on track the next few days, but when the field was down to the final 27 he was among the bottom third for quite some time. Fortunately for him, he had a fruitful Day 7 and ended with more than seven times what he started with. Big stack or short stack, you can’t count Riess out.

Check out our fantastic promotion at PokerStars where you can compete in a $20,000 freeroll!

Riess is reminiscent of 2011 November Nine finalist Eoghan O’Dea in both stature and demeanor. He comes of a bit quiet and shy, but in reality he’s a skilled player with a killer edge. He’s also got the support of the entire WSOP Circuit community behind him including recent bracelet winners Loni Harwood, Bryan Campanello and Jonathan Taylor, just to name a few.

One of the most unreal experiences in my life. Congrats again to our Circuit Grinding November Niner @RyanRiess1 #RiessTheBeast #deeeeeeeceJuly 16, 2013
ReplyRetweetFavorite
Follow

He even got some love from his alma mater:

Unfortunately PokerNews was unable to get a video interview Riess, who missed the WSOP media day after making the November Nine. Hopefully we'll be able to grab him in the next couple of weeks, though, so stay tuned. 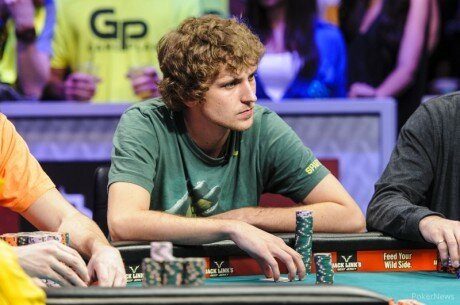