The first event on Season 7 of the Australia New Zealand Poker Tour (ANZPT) began on Wednesday as 99 players hit the tables for Day 1a of the 2015 PokerStars.net ANZPT Perth Main Event.

After six 60-minute levels, exactly 54 players made their way out of Crown Perth poker room having a secured a spot on Day 2. Leading the way with a stack of 80,450 was Raiden Kan.

Trailing Kan with 75,450 in chips was none other than Team PokerStars Pro Bryan Huang. For much of the last level of the night it was looking like Huang was going to finish on top, but he ultimately missed out by a few thousand.

Australian regular Didier Guerin closed out the top three stacks with 68,400 in chips. Guerin had a great day at the felt and not only in the Main Event. He finished runner-up in the $1,100 six-max side event just a short while before Day 1a kicked off.

flop. Guerin had the

for the nut straight and was up against

for two pair and the

for the nut flush draw. Guerin's hand managed to stay ahead and with that he had quickly tripled up and never looked back.

Players who weren't as fortunate as the aforementioned include Day 1a casualties Adrian "Knightsgeee" Attenborough, Jonathan "xMONSTERxDONGx" Karamalikis, Edison "GooGieMonA" Nguyen, Brian Mcallister, and Daniel Neilson. All those who did survive Day 1a will now return to the felt from 12:30 p.m. local time local time on Friday. 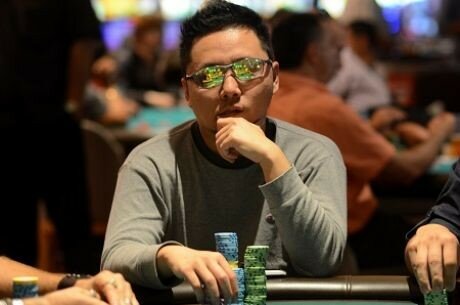