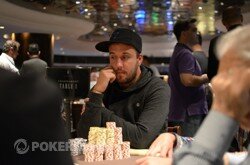 Day 2 of the PokerStars.net Australia New Zealand Poker Tour (ANZPT) Sydney Main Event is in the books. A field of 208 players from the original 461 headed back to The Star City Casino after making it through the two Day 1’s on offer. The $922,000 prize pool generated exceeds that of any event on last year’s ANZPT calendar which bodes well for the direction Australian poker is heading.

Twenty-seven players survived 10 long levels of play and will head back to fight it out on Day 3. The bubble burst when Luis Arrilueca, who finished second at this very event last year, lost a flip with AK v 1010. 54 players made the money and with that secured a minimum payout of $3,688. However, all eyes were focused on the $226,812 top prize and it was Ireland’s Nicholas Heather who put himself with the best chance of taking home the bacon.
Heather started the day as one of the chip leaders but fell to below average when he lost two big pots early on. However, his fate changed and late in the day he won a 600,000 pot holding Jacks v AK to close the day with just under one million chips. The Irishman, who plays online under the handle "Salamander," has won over $600,000 in online tournaments including a $150,000 score in a miniFTOPS event in 2010. He is no stranger to the live felt either and made the final table of a WSOP event in 2010 and took home just under another $150,000.
Heather won’t have to look too far over his shoulder to know taking this event down will not be easy. As 2nd in chips at the end of the day is Oliver Speidel aka 2012 Aussie Millions Main Event Champion and owner of a whopping $1.8 million in live tournament earnings. Speidel managed to eliminate Day 1b chip leader Tam Troung and kept chipping up to finish the day bagging up 797,000 chips. The Melbourne man will be looking to make his first Sydney live cash a big one.
Notables who started the day included international stars Team PokerStars Pro Angel Guillen, Dan "djk123" Kelly and Maria Ho. Wallabies still in field were Australian Poker Hall of Fame members Leo Boxell, Gary Benson, Billy Argyros and Mel Judah. Last year’s ANZPT Sydney champ Michael Kanaan was still in the field and remained hopeful of reclaiming his title. On this occasion it wasn’t to be for any of the above. However, APPT Sydney 2008 winner Martin Rowe was hoping to add to the $1,000,000 he won in that event and he will definitely do so as he remains in the field with a 294,000 chip count heading into Day 3.
A few of the notable players who finished in the money include Dean McIver (53rd), Andrew Mellado (52nd), Todor Kondevski (46th), Suzy Khoueis (38th) and Jim Sachinidis (29th). The likes of 2012 Aussie Millions ring winner Jim Collopy (638,500), former ANZPT final tablist Liam O’Rourke (495,000), 2010 APPT Manila winner Gordon Huntly (380,500) and Gold Coast player Mishel Anunu (434,500) dominated their tables late in the day to finish the night with enough chips to make a difference come Day 3.
Play will resume at 2:00 pm in Sydney for the 27 remaining players and we will play down to the 2012 ANZPT Sydney Main Event champion. Will the title stay Down Under? Make sure to join the PokerNews Live Reporting Team for the exciting final day of action at The Star in Sydney, Australia.
ANZPT Sydney Main Event Top Five Chip Counts
1st: Nicholas Heather: 953,500
2nd: Oliver Speidel: 797,000
3rd: Jim Collopy: 638,500
4th: Alec Smith: 572,000
5th: Liam O'Rourke: 495,000

You are not allowed to do that action. Login or Register home.