Crown have been at the forefront for poker tournaments over the past few years, and in 2010 they are taking another step forward by launching the Aussie Millions Academy.

The Aussie Millions Academy is a series of seminars presented by trainers from the online tutorial site Deuces Cracked; whose stable includes 2 Months 2 Million’s Jay Rosenkrantz, Emil Patel, Brian Roberts and Dani Stern along with 2008 WSOP Bracelet holder Vanessa Selbst and a further six members that will be making the journey down under.

Each seminar will be held prior to the start of the Championship event of the day at Crown throughout the Aussie Millions Championships from the 15th – 30th of January. Specialising in the discipline that is being played on the day, the seminar will comprise of a 90-minute tutorial and 30-minute Q&A session, or alternatively, a 4-hour session prior to the start of the Main Event so that you have the best shot of securing an Aussie Millions Championship title.

With each seminar unique in nature and catering to different aspects and variation of the game, everything from No Limit Holdem to HORSE, Full Ring to Six-Max and even Heads-Up will be covered following the tournaments on the Aussie Millions schedule.

The schedule of the Aussie Millions Academy seminars will be as follows: 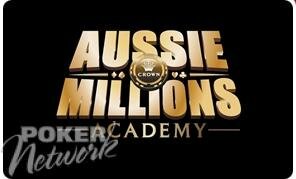 Aussie Millions Academy is set to be a huge hit!