Minh Nguyen overcame 225 total players to be crowned the winner of the final stop on Season 8 of the Asia-Pacific Poker Tour. After a heads-up deal, Nguyen claimed NZ$111,600 for winning the 2014 APPT Auckland Main Event.

Nguyen began the final table of the event with a giant chip lead and as expected, the highly-regarded Australian poker pro used those chips to try and steamroll over his eight opponents. It was working, too, as Nguyen played a part in several of the eliminations before beginning heads-up play against Thomas Ward with a big chip lead. Then the tides turned, and Ward chipped away until he was in front.

That's when things got interesting, as the two player's agreed to a deal and then to blindly go all in for the title and the extra NZ$10,000 that was left to play for. It was at this point that it looked like Ward was going to win.

As agreed upon, the two players had gone all in without looking at their cards, and Ward had Nguyen at risk with the worst hand. But Nguyen won the flip and despite Ward clawing back with double ups over the next two hands, Nguyen ended up claiming the final pot to win the title and the NZ$111,600 top prize.

Nguyen was clearly elated with the win, celebrating with several friends on the rail, including his brother Edison Nguyen. That name might sound familiar and that's because Edison is a champion of poker in this region, too. He won ANZPT Melbourne just a few months ago.

This is the first time in Australasian poker history that two brothers have won titles on the APPT and the ANZPT. The brothers are both considered two of the best cash-game players in their home country, and this marked Minh Nguyen’s first major tournament victory. 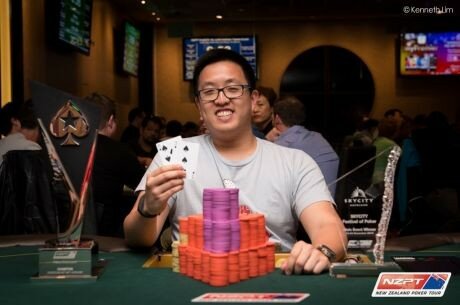