Traditionally the Asian Poker Tour has been renowned for their legendary parties and glamourous promotional models, but in between the fun, drinks and entertainment, there is also a poker tournament with hundreds of thousands of dollars given away this week at the APT Manila, culminating in the US$2,700 Main Event.

227 players headed to the Resorts World Casino in Manila, Philippines for the APT Philippines Main Event and after four days of play it was local Michael Cua who captured the trophy and the US$176,700 in prize money.

The final table was headlined by PokerStars Team Asia Pro Bryan Huang who was expected to use his experience and massive chip stack to steamroll the largely unknown final table lineup. However Huang didn’t have things go his way early and was quickly back into the pack as local Filipino Mike Puno stormed out to a commanding chip lead holding more than 50% of the chips in play when eight-handed!

As the short stacks dropped away Huang was able to apply some aggression as he moved all in on multiple occasions to steal the blinds and antes and get himself back into contention, before pulling off a superb bluff against Antonio Albano. On a three-spade flop, Huang called bets on the flop and turn before moving all in on the river. Albano folded and Huang flashed just king-high to put some fear into his opponents as play reached four-handed.

Last woman standing Tracy Hugh was eliminated in fourth place, as Puno led the lead with more than double the stack of Huang, with Michael Cua sitting on the short stack.

but Cua called with a dominant

which held on the

board. Huang picked up US$44,000 for his efforts but would be a little disappointed to miss out on the trophy. 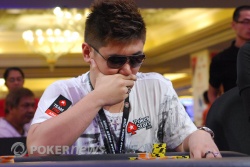 Cua had grabbed a narrow chip lead entering heads-up play over Puno in a battle of absolute contrasts. Puno had held a dominant lead for most of the final table while Cua was down to just 14,000 chips late on day three before recovering with double up after double up to give himself a chance at the title.

Cua remained aggressive heads-up and chipped away at his opponent before the final hand of the tournament. Both players had checked the

flop, and Puno checked the

turn over to Cua who fired 50,000. Puno responded by moving all in and Cua made the call, tabling

for middle pair. It was a great call as Puno was drawing with

for a flush draw. The river bricked the

and the remarkable comeback of Michael Cua was complete as he claimed a memorable victory and US$176,700 in prize money!

Earlier this week the APT announced their next major stop as the tour will head back to Macau and the “City of Dreams” at the Hard Rock Casino and Hotel. The APT Macau will run from November 6th to 14th and will feature at least eleven side events and numerous satellites.

APT Chief Executive Officer Mr. JeffMann said, “We are delighted that APT Macau has a new home and in particular a new collaborator: Hard Rock Hotel, designed with the spirit of rock ‘n’ roll in mind at City of Dreams in Macau. We are planning for a 9-day festival of poker that will include a main event that we expect it will attract a record number of players from around the world; at least 11 side events and numerous satellite tournaments”.

The Main Event will be a HK$32,500+2,500 buy-in (approx US$4,180+320) and is set to attract players from all corners of the globe. Last year it was Frenchman Adrien Allain who took down the title and around US$380,000 in prize money. For your chance to be among the cash in Macau keep an eye out for upcoming satellites on Party Poker, PKR and Titan Poker.

You are not allowed to do that action. Login or Register home.