Following the completion of the Asia Championship of Poker (ACOP), the Asia poker year has now concluded with Chian’s Jian Yang winning the 2013 Asia Player of the Year (APOY) award!

Since 2009, the Asia Player of the Year has been awarded to some of the best poker players on the Asian poker circuit. Kitty Kuo, Bryan Huang, Hung-Sheng Lin and Yosuke Sekiya were all previous winners and all formidable players whenever they took a seat at the poker table. Jian Yang now joins them as one of the elusive winners of the most coveted title in Asia.

Unlike previous winners that picked up a multitude of results on their way to capturing the APOY, Yang only registered three results during the calendar year, but he made them all count with 3 final tables and two wins. Yang managed a 4th placing in a Macau Poker Cup: Red Dragon side event for HK$133,500 (approximately $18,077) before winning the ACOP Platinum Series Main Event for HK$206,600 (approximately $27,975). However Yang would launch to the top of the leaderboard just two weeks ago when he topped a 338-player field to win the ACOP Warm-Up for HK$1,700,000 (approximately $230,178).

Although Yang may have held the top spot approaching the second half of the ACOP schedule, he would still have to sweat some results once the ACOP Main Event approached the final table. Terry Fan’s bust in equal 10th saw him fall two spots shy of topping Yang while Yoshitaka Okawa finished in 5th to also be two spots shy of taking the top spot. Once Yifan Zheng finished in 3rd – needing a win to take top spot – and no other major results occurred in the High Rollers or final No Limit Hold’em event of the series, the APOY title was all Yang’s.

2013 Asia Player of the Year Leaderboard

With Yang defining the statement of making it count, he will not only see his name engraved on the stunning Asia Player of the Year trophy, but also receive a 1-year sponsorship with PokerStars Macau for all championship events in Asia for 2014 including the Macau Poker, Asia Pacific Poker Tour and ACOP. Congratulations to Jian Yang for becoming the fifth Asia Player of the Year winner following an outstanding 2013 on the Asian poker circuit. 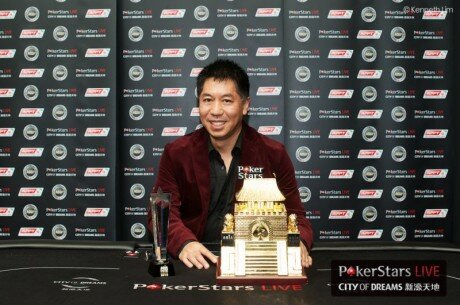