The ever-dramatic first event of the 2014 PokerStars Caribbean Adventure has officially reached a conclusion. Despite it being a new year, the German domination continues as Fabian Quoss was able to defeat Dan Shak heads up to take home the title as well as $1,629,940 in prize money.

Typically, final tables on the European Poker Tour are eight-handed, but due to an exciting double elimination to conclude Day 2, this final table began with just seven. Shak held the chip lead coming into the final table with Team PokerStars Pro Vanessa Selbst right on his heels. Also present at the final table was $1,000,000 Big One for One Drop champion Antonio Esfandiari, 2013 One Drop High Roller champion Tony Gregg, Matt Glantz, and 2013 Global Poker Index Player of the Year Ole Schemion.

Neither of the short stacks improved on the

board and Quoss collected the remaining chips of both players. Just a few short hands later, short-stacked Glantz saw his tournament come to a close. Glantz's final hand began when Esfandiari opened to 160,000 from under the gun with

and it folded over to Selbst in the small blind. She re-raised the action to 605,000 with

Glantz was dominated heading to the community cards and did not improve as the board came down {3-Diamonds}{5-Clubs}{7-Clubs}{7-Spades}{K-Spades}. He collected $445,520 for his fifth-place finish.

After some exciting four-handed play, the match came to a head during a confrontation between Selbst and Esfandiari. At 40,000/80,000/10,000, Selbst opened with a raise to 160,000. Esfandiari three-bet to 430,000, and Selbst four-bet him all in for about 1.9 million. Esfandiari called and the hands were revealed to show that the two were racing for the Magician's tournament life.

and Esfandiari kept his lead. Selbst picked up additional outs, however, as she could make a wheel with a trey. It was not needed, however, as the

spiked the turn and put Selbst in a dominating position. The

bricked off on the river for Esfandiari and he was forced to settle for a fourth place finish.

Three-handed play saw much drama as large amounts of chips exchanged hands several times and the chip lead was constantly changing. In what began a dramatic series of hands, Selbst lost a fair sized hand to Shak. Immediately following that, Selbst was able to double back through Shak and take a huge chip lead.

Soon after though, Selbst lost a large chunk of those chips when she turned top two pair against Quoss' turned Broadway straight. Quoss scored a full double and crippled Selbst. Shortly thereafter, she moved all in for her last roughly two million from the button with

. Quoss called from the big blind with

and the Super High Roller was suddenly five cards away from heads up play. The

flop was of no help to Selbst, and she was still hunting for a king or a nine heading to the final two streets. The

hit fourth street and the

fifth, sending Selbst home as the third-place finisher for a payday of $760,640.

Following Selbst's elimination, Quoss and Shak took a dinner break before returning to the felt to determine a champion. Quoss continuously applied pressure during the bout and the match finally came to a head after about an hour of play. On the final hand, Quoss limped from the button and Shak checked his option to a

fell on fourth street. Shak checked again and Quoss fired out 425,000. Shak moved all in for 2.275 million and Quoss snapped him off.

Quoss was in the lead with a straight and was looking to dodge an eight or a king heading to the river. The dealer produced the

as the final card and Shak was eliminated as the runner-up. Quoss seized the victory and the title of Super High Roller champion!

That concludes PokerNews' coverage of the $100,000 Super High Roller, but the action is just getting started at this year's PCA. Be sure to tune in to our ongoing live updates of the $10,000,000 Guarantee Main Event as a field packed with tons of hopefuls attempt to reach the goal of becoming the next PCA Main Event Champion. 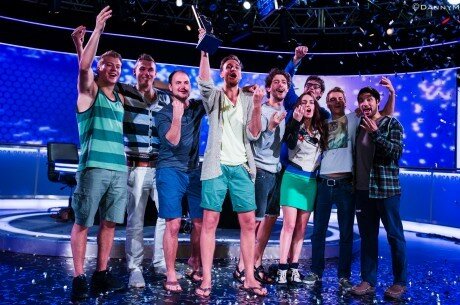