Germany's Fabio Sperling is the man to catch at the end of Day 4 here at the EPT 11 Prague Main Event. Sperling bagged up 4,357,000 after five levels of play to top the 22 players still in contention.

Stephen Graner from the USA is in second with 3,228,000 chips. Fellow American Vanessa Selbst will enter Tuesday fifth in chips, and likeable British pro Sam Grafton is in third. Grafton is from the U.K. but has recently made Prague his home. The popular “SquidPoker” spent the day talking up a storm and pouting his way to finish with 2,610,000.

What happened on Day 4?

Day 4 began with 61 players, and losing the first 30 happened very quickly. Team PokerStars Pro George Danzer finished in 53rd for €16,970 after losing a flip with fours against the ace-queen of Tamer Kamel. The eliminations slowed a little after the first flurry of exits, with the average stack then around 80 big blinds, but the field was gradually whittled down to the 22 by the time the day ended.

Vanessa Selbst is the last remaining Team PokerStars Pro in the tournament and she endured a few swings but stuck to her game plan on her way to a fifth place end-of-day finish securing 2,040,000 chips.

David Kitai briefly held the chip lead and he finished in fourth place with 2,307,000, while Simon Mattsson, who started the day as chip leader, ended with 1,172,000. Nandor Solyom will return as the short stack with 182,000 after losing a flip to Francesco Grieco just before the day ended.

Online qualifier Brian Altman was the chip leader at the end of Day 2 but at one point today he was down to one big blind. A series of improbable double ups, including cracking aces with king-deuce all in preflop, saw him escape elimination several times before he finally bust in the very last hand of the night to finish 23rd for a €32,270 payday.

Play resumes on Tuesday at noon CET and the plan is to play down to the final six. The tournament is just two days away from crowning an eventual champion from this record breaking field in Prague and the winner will take home a huge €969,000 payday. 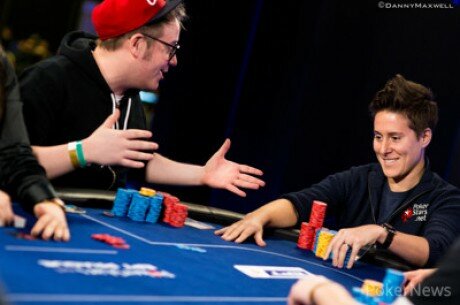