The penultimate day of the ANZPT Queenstown Main Event has entered the record books and the final table is set!

Leading the final nine is Australia’s Jonathan Bredin. At the start of the day Bredin was the chip leader and now he will begin the final day with a 657,000 in chips. That stack is almost a third of the chips in play.

Bredin’s story has been an inspirational one here in Queenstown as the 23-year old suffers from cerebral palsy, yet that hasn’t stopped him from playing poker at a truly elite level. Bredin only has limited use of one arm and impeded speech and through the aid of a special iPad and a helper, he is able to communicate his decisions.

Bredin’s nearest competitor at the final table is Jon Pierre Narbey with a stack of 408,000. Still in contention, albeit with not as many chips as Narbey and Bredin, include the likes of Raj Ramakrishnan, Daniel Laidlaw and Daniel Neilson. Ricky Kroesen is also still alive and with plenty of chips to threaten. Kroesen finished 4th in this event last year and will certainly be looking to go all the way this time.

Be sure to check out the final table draw and chip counts below.

It took almost exactly six levels to complete Day 3 of the ANZPT Queenstown Main Event. At the beginning of the day there were 23 hopefuls, but 14 of them would have to hit the rail before the final table was set. The action started slowly, but would speed up until Karl Radel was eliminated on the bubble.

When 10 players remained Jackson Zheng must have felt a bit of déjà vu as he had finished 10th in the 2011 ANZPT Main Event. Unfortunately that’s the exact same place he finished in this year's event as he was yet again eliminated as the final table bubble-boy.

The final nine players will return to the felt from 12.30 p.m. local time on Sunday and play down to a winner. Who will become the 2013 ANZPT Queenstown Main Event, claiming all the glory and NZ$93,600 to go along with? Make sure to return to find out! 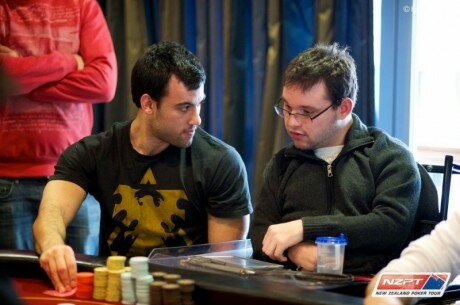