When Jonathan Bredin defeated a field of 126 players to be crowned the ANZPT Queenstown Main Event champion, it was unlike any other story we had ever seen. Bredin suffers from cerebral palsy and requires the aid of a special iPad and a carer to help communicate his decisions at the poker table. However, apart from this aesthetic aspect of his game, he has shown over the last five days that he can play poker with the best of the best.

That’s not where the story ends, though. Not only was this Bredin’s first-ever elite poker tournament after only playing small-venue games back in his home town of Melbourne, but the

that Bredin held on the final hand when he won just happens to be the same two cards tattooed on his shoulder — suit and all. Most couldn’t even dream up a story like that, but Bredin made it a reality.

Following his victory, Bredin said that he is going to buy a car that is specially designed for someone in his medical situation. He also plans to play as many events as possible on the ANZPT and the APPT.

When the final day began, it was Bredin who held the chip lead, while Colin Carpenter was the short stack. It wouldn’t be Carpenter who would go home first, though, as Michael Chon would find the rail in ninth place. Chon had his short stack all in preflop holding the

and couldn’t compete with the

From there, prominent Australian Daniel Neilson finished in eighth place, earning NZ$12,750. Neilson was all in preflop holding the

of Daniel Laidlaw. Despite hitting a jack on the flop, Neilson would fail to survive when Laidlaw hit a set of eights on the turn. Carpenter was next out the door, with his

Ricky Kroesen failed to improve on his fourth-place finish in this event last year when he was eliminated in sixth this time around. Kroesen shoved his last chips in holding the

on the turn of a

board and had to come up against Bredin’s

. Kroesen was unable to improve on the river and was sent packing.

Up until five-handed play the action had been quite steady, but at this point the players slowed up. One single hand between Jon Pierre Narbey and Chiu Yeung Lee even saw the clock called four times and the action take 17 minutes to complete.

Grab a free $5 at Full Tilt Poker while you can; the offer ends on August 31.

It was roughly 90 minutes between eliminations before Narbey eventually busted in fifth place. He was all in preflop holding the

, but couldn’t stay ahead of the

Despite dealing the fatal blow to Narbey, Ramakrishnan was the next player to find the exit. First, Ramakrishnan lost the majority of his chips in a coin-flip situation against Bredin before being forced to be all in for less than one small blind. On his final hand, Ramakrishnan held the

of Laidlaw, but couldn’t find any help on the

Three-handed action wouldn’t last too long as Lee was unable to hold onto his tournament life. Lee’s final moments in Queenstown saw him all in preflop holding the

of Bredin. Lee managed to find an open-ended straight draw on the

turn, but was eliminated when the river bricked off with a 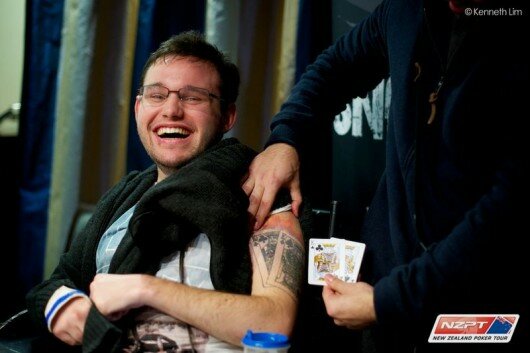 At the beginning of the heads-up battle, it was prominent Australian cash-game grinder Laidlaw holding a slight lead over Bredin, but that lead would change several times before the tournament entered the record books. At one stage, it was looking like Laidlaw was going to be the champion when he held the

and had Bredin at-risk holding the

. However, Bredin would end up spiking a deuce to stay alive and take the lead back off Laidlaw.

Just a short while after Bredin had doubled up, the final hand of the ANZPT Queenstown Main Event would play out.

river meant that he was the runner-up, while Bredin had been crowned the champion.

At the conclusion of the final hand, Bredin’s carer told the rail about Bredin’s tattoo and showed them the same two black kings shining in ink from his shoulder. An amazing story added to an amazing victory from Jonathan Bredin, who despite suffering from cerebral palsy has overcome all odds to be crowned a very deserving champion of the ANZPT Queenstown Main Event.