Karamalikis Returns To Number One; Hinrichsen Climbs Into Top 10

The ever-popular PocketFives.com rankings have been updated and now that all the points from the past seven days have been calculated, we have a familiar face back in the driving seat of the Australian leaderboard.

As expected, Jonathan “xMONSTERxDONGx” Karamalikis has reclaimed the number one spot after three impressive results towards the end of the previous update. A seventh place finish in The Bigger $109 was backed up by a sixth place in The Hotter $16.50 and a runner-up spot in the $8.80 rebuy tournaments on PokerStars. These superb results not only bagged Karamalikis over $17,000, but almost 450 leaderboard points too.

It is difficult to be consistent in online poker tournaments, but one man who continually returns great results is Jay “SEABEAST” Kinkade who now finds himself in second place in the standings and within touching distance of that coveted number one slot.

Kinkade’s biggest results of the past week top the scales at $3,284.42 and $4,320.00. The “smaller” of the two cashes was awarded for finishing second in the $82 NL Hold’em 6-Max Hyper Turbo on PokerStars, while the larger of the two impressive scores came from another second place finish, this one in the $109 Turbo on PokerStars. Surely it is only a matter of time before Kinkade claims the number one seat for himself.

The top 10 has two new additions to it this time around, Matt “brownie682” Brown coming back in ninth place after an absence that spanned several weeks. Although Brown has not had any massive scores of late, he has put in a phenomenal amount of hours at the virtual felt and it is obviously paying off.

The other new face in the top 10 is not a new face on the Australian circuit as it is Andrew “FUZZBUNGLE” Hinrichsen. The World Series of Poker Europe bracelet winner has been catapulted into tenth place thanks in part to a number of big scores.

Hinrichsen picked up $15,525 when he finished second in a PokerStars $109 Turbo 2x Chance, then on the same night he had a deep run in the Sunday Million, but ultimately finished in 91st. That deep run must have given Hinrichsen a confidence boost as he won a $69 buy-in tournament on Full Tilt ($3,576.96) the next day and also finished fourth in a $150 buy-in tournament for $3,042.00; also on Full Tilt Poker. Impressive indeed.

Data from Pocketfives.com was used to create this article 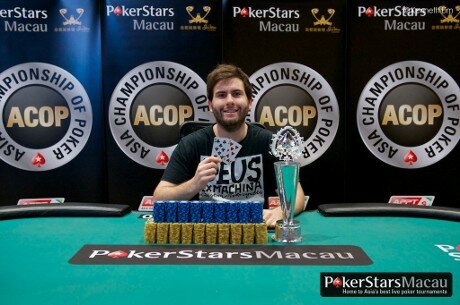