The first stop on Season 7 of the Australia New Zealand Poker Tour began five days ago at Crown Perth in Western Australia, and in the end it was Scotland's Michael Kane who overcame a total field of 192 players to be crowned the PokerStars.net ANZPT Perth champion.

Kane began the final table with the fifth largest stack and was even short-stacked and all in for his tournament life with nine players remaining. He found the double up, however, and from there never looked back as he ultimately made a heads-up deal with Stephen McHugh before going on to win the title and the AU$98,900 top prize.

The big story of the final table was the demise of Team PokerStars Pro Bryan Huang.

There were high hopes for Huang to win his first ANZPT title and he was always going to be hard to beat considering he started the final table with the chip lead. Unfortunately, it just wasn't Huang's day as it seemed every time he raised, someone three-bet, and every time he three-bet someone four-bet. With seemingly no spots in there for Huang to make a move, he simply bled chips until he was down under 300,000 with blinds at 8,000/16,000.

By this point play had been nine-handed for over two and half hours, and this is when Huang got his chips in preflop holding the

and was up against the eventual champion Kane with the

. Kane had a slightly shorter stack and managed to find a double up and leave Huang extremely short when the board ran out

Huang had just a couple of big blinds in his stack after this hand and despite finding a quick double up, he ended up being eliminated when he moved all in preflop with the

and ran into Navin Bechar's

Just like that, Huang had gone from chip leader to out in ninth for an AU$10,500 score.

It was the beginning of Huang's demise that kicked off Kane's domination of the final table as not long after doubling up through Huang, Kane would become the first player to move his stack over seven-figures.

Kane crushed his opposition and once Gregory Wheeler (8th) and Robert McLean (7th) had both hit the rail, Kane had triple the amount of chips of his nearest competitor.

board. McLean was crippled at this point and wasn't able to rebuild, ultimately hitting the rail in seventh place.

From here, Kane was able to control the table while Raiden Kan (6th), Michael Guzzardi (5th), Navin Bechar (4th), and Michael Doyle (3rd) were eliminated to usher in heads-up play between Kane and McHugh.

Before the cards were in the air for the heads-up battle, the two players struck a deal, with Kane locking up AU$78,900 and McHugh guaranteeing himself AU$72,100. That left AU$20,000 for the eventual champion.

With so much cash on the line, it's no surprise it was a tense heads-up battle that would last almost three hours. The lead changed several times during that period, but it was ultimately Kane who claimed the final hand of the tournament when McHugh got just over 20 big blinds in preflop with the

and Kane made the call with the

flop to take the lead, but with a

on the turn and a

on the river it was a runner-runner flush that would seal the deal for the new ANZPT Perth champion Michael Kane. 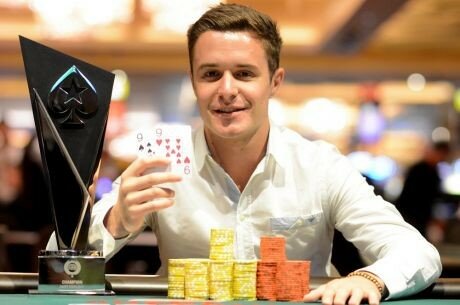