The History of the Aussie Millions

Thanks to the Aussie Millions, Australia has become one of the major stops on the worldwide tournament poker circuit!

Held yearly at the Crown Casino in Melbourne during January, this big buy-in event – in conjunction with a comprehensive schedule – continues to draw players from around the world thanks to its multi-million dollar prize pools and the tournament’s prestigious fields. Travelling down under may be one of the longest trips to get your poker fix, but it is without doubt the hottest poker action in the Southern Hemisphere.

Originally being introduced at Crown in 1997, poker quickly found a place within the Aussie gaming community, and in the following year, Crown hosted the Australasian Poker Championship featuring a $1,000 buy-in. As the championship event continued to develop, it eventually became known as the Aussie Millions, and by 2001 the tournament’s prizepool had grown to $200,000 – mostly due to the increased buy-in of $5,000.

Similar to the USA, Australia also found itself in the middle of a poker boom, and by the 2003 running of the tournament, 122 runners and a $1.2 million prize pool was in place. However it wouldn’t be until 2005 that the tournament would arrive on the International poker scene when 263 players – half of whom were International – handed over $10,000. New Zealand’s Jamil Dia would walk away with the lion’s share of the $2,630,000 prizepool when he collected $1,000,000 for his efforts in the largest tournament in the Southern Hemisphere at the time.

2006 would see 418 players take to the felt with many of poker’s biggest names making the trip down under with Mike Sexton, John Juanda, Daniel Negreanu, Barry Greenstein, Kathy Leibert, Scott Fischman, Chip Jett, David Williams, Antonio Esfandiari and Phil Ivey representing their fellow professional colleagues. Just like the previous year, another New Zealander would take the trophy off Australia shores when Lee Nelson collected $1,295,800 for besting the world-quality field.

Poker worldwide continued to grow, and in Australia it was no exception with 747 players fronting up for the 2007 Aussie Millions. Team Full Tilt pro Gus Hansen would prove victorious on this occasion walking away with $1,500,000 and the newest title of Aussie Millions Champion.

2008 would again see growth with 780 players looking at replicating the Dane’s feat of the previous year. However it would Russian twenty-one year-old Alexander Kostritsyn proving he had what it takes to pocket the $1,650,000 first prize after having the better of heads-up opponent and Team Full Tilt pro Erik Seidel.

Although the 2009 field dropped to 681 players, the fight for the guaranteed $2 million first-place prize was still hotly fought on the felt. Unlike previous years, the 2009 trophy and title would remain on home soil when Stewart Scott was crowned champion. This year also saw the debut of the million-dollar buy-in cash game that featured Tom ‘Durrrr’ Dwan and Patrik Antonius.

With Jonno Pittock and his loyal staff in the Crown Poker Room working around the clock on making the 2010 Aussie Millions the best yet, word circulating the tables is that 800 players are expected for the $10,500 Main Event. Combined with roughly 2,000 players gracing the Crown tournament floor over the twenty-event poker extravaganza, next year’s hottest poker action can be found at the 2010 Aussie Millions from January 14-31st, 2010!

PokerNetwork has a number of ways to qualify for the 2010 Aussie Millions. So what are you waiting for? Take your shot at becoming the next Aussie Millions Champion! 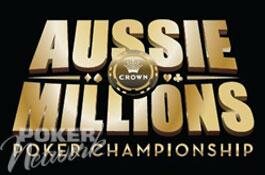