Tony G Exclusive: "With TonyBet Poker I Gave Players What They Wanted"

One week after turning 40 and celebrating his birthday with the launch of the first real-money open-face Chinese poker site, TonyBet owner Tony G joined us for a talk about poker, politics, and the importance of not fearing the impossible.

"I am really excited about what we just launched," Tony told PokerNews. "And now I am curious to see how it goes. People wanted to play online open-face Chinese poker for a while, and now they can finally do it on TonyBet Poker."

While in Melbourne escaping the darkness of the cold Lithuanian winter and preparing his run in the European Parliament, the poker pro turned businessman is entirely focused on building a healthier lifestyle and finding some new great challenges for what he likes the most: living an interesting life.

Many say the age of 40 is a game-changer because that’s when things start getting serious. How do you feel about that, Tony?

Well, I can tell you that becoming 40 is not something you really wait for. I remember the way I used to look forward to becoming a teenager or turning 18, and that was a whole different story. Now, it’s that time when you start looking backwards to a past when you were younger and stronger. You know, after 40 it is hard to improve, to get better than you were before.

The way you celebrated your birthday giving yourself a brand new business adventure was very interesting. Bringing online open-face Chinese poker on TonyBet was quite a present.

I thought that was more of a present for the poker community than for myself! A lot of people asked me why no one had it already, so I thought it was about time we launch the product. And considering how we rushed to get it out, I would say we did really well.

We had some bugs affecting the software, but we started sorting things out, and I think everything will be solved in the next couple of months. After all, starting with some issues and bugs is absolutely normal.

You say it is normal, but there have been a few people on various forums mentioning that there was probably a need for some more testing to have been done. Would you care to respond to that?

As I said, there are some bugs and that is why the game is still in beta. Although I think almost all of the bugs have already been sorted out, it would not be fun if you would just release a brand new poker product like this open-face Chinese poker on desktops and mobile and not have any issue with it. I think it is very good that people criticize it. Everybody is welcome to give us advice, and we appreciate the feedback in order to strengthen the product.

Bugs aside, how did the launch go? Did you get the response you expected from the community?

The amount of sign-ups we are getting and the amount of players we are generating is unbelievable. To give you a number, just know that we are already reaching over 100 real-money players during peak hours.

I am very happy and surprised at the same time. We had hundreds of sign-ups even by doing almost no advertising at all.

How do you feel about people saying you might've hit on the next big thing?

I think that’s partially because open-face Chinese poker is such a fun game. If you have nothing to do, you can jump on your mobile and start playing — even for as little as five cents a point.

Think about Texas hold’em. There you have to be disciplined, you have to wait, it's better to play multiple tables. With open-face Chinese poker, instead, you can play one table on your mobile (or your computer while we are still in beta) and always be in the middle of the action.

Now that I am having some time off, I am playing quite often and I must say it’s a lot of fun, especially the pineapple version of the game. Soon we will be also launching the super-quick pineapple 15 variant and start with tournaments and sit-n-gos, so things are going to be even better.

Another good thing about open-face Chinese is also that the game hasn’t been completely solved out yet and that there is no perfect way to play it. Even for robots.

Now that you named bots, in the past months there have been some talks about open-face Chinese poker being potentially a fertile land for them. How big of a threat are bots to TonyBet Poker players?

Saying that bots are a problem is absolutely not true. I know some of the best people working with artificial intelligence in U.S., and I know for sure that the game hasn’t been worked out. Nobody can play perfect open-face Chinese poker and neither can bots. The maximum you could get from a bot would be to play as an average player.

We used to have Texas hold'em bots 10 years ago, and it is undeniable that bots are going to be everywhere, but we are offering a platform that allow players to avoid any sort of risk. If you worry about bots, you can also just play against people you know and you will never have troubles.

We are also going to be very harsh on this issue. If there is a bot playing, if there is a player who is not being active in chat or if our technology shows that a user might be a bot, we will freeze the account. You can be sure we are going to check very seriously every time we will get suspicious activity. But, to tell you the truth, other poker rooms do not include open-face Chinese poker in their offer because it is not profitable, not because of bots.

What do you mean "not profitable?"

Open-face Chinese poker is a game for players, not for operators. It is only four-handed and does not generate very big revenues, so from a business perspective, it doesn't make huge sense to have it.

So, how come you decided to go for it?

Because at TonyBet, we see it as an add-on service we give to players as many other ones we already had before open-face Chinese poker came along. Also because a lot of players have been asking for it.

How long does it take from the moment of thinking up the idea of creating an online poker room that spreads open-face Chinese poker to the day of launch? How difficult is the process to create something like this?

Developing this game needed the work of an entire team of over 100 people that we have at TonyBet, as there are a lot of things to be done before the launch. You know, it is not just about releasing the game, there's much more behind it. There a website to be made, a support team needs to be built, the cashier has to function properly, among other things, and then there is the game itself.

It needed a lot of work, but since we have a very talented team we managed to finish most of it in four months. I’d say that we started in March, and we were ready to develop around July. Then in a little more than four months we had it up online. It will be interesting to see how it will all run once we will also have the mobile apps for iPhone and tablets fully working. As for now, those are awaiting approval from Apple and Google.

What comes next then? Ten years ago, you came out with PokerNews, and today we're discussing the first open-face Chinese poker site?

Look, I have always tried to go for new things and I've always tried to challenge myself as I never wanted to be "just a poker player." I always told people that poker should be a hobby, not your whole life. I have built at least 10 successful businesses and there are probably 30 that I have invested in and been part of that turned out to be unsuccessful.

PokerNews was bought for $8,000 some 12 years ago. We made a lot of mistakes along the way, the site was ugly, the content wasn’t the best, but we had ambitious goals. From there, we built a highly-profitable business.

What’s the next goal for the 40-year-old Tony G? The European Parliament?

I really think you always have to keep challenging yourself and aim to reach for those things that people say are impossible, so I am going to have a little run in the European Parliament election with the Lithuanian Liberal party. My dream is probably to start leaving the business world and get into politics, so should I not make it at the European election, I will try a few more times. But, I am also ready to step back if things don’t work out.

You know, politics is a competition; you can see it as a tournament or as a sit-n-go, if you want. We are all playing. Every country is playing and whoever plays the smartest, is going to be successful.

Switzerland has been playing a great game for a long time, even without having great resources available on the territory. You need to learn how to get your own space and use it in the best possible way. I think Lithuania is being successful by focusing on IT space, and we have to keep working on what we are good at. We have to be innovative and set conditions for businesses to do well because in that way the whole country will live better.

Seeing your commitment and knowing that you have kept some of your businesses in Lithuania, I would say you are still very close to your home country even after all these years. Is that true?

I have businesses all over the world now, but it was always important for me to keep what I could in Lithuania. I am Lithuanian, and I want to do the best I can for the country, so that is why I kept a good part of my business there. Lithuanians are very hard workers and I wanted to reward them.

Join Tony G. and hundreds of players from all over the world and open an account on TonyBet Poker, the first online poker site offering real-money open-face Chinese poker! 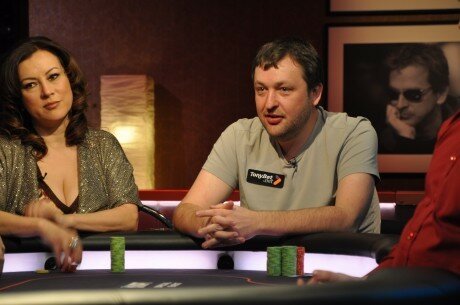