At the end of each year, PokerNews is happy to bring you the Top 10 Stories of the Year. The list is compiled through voting by our staff, and first on this year's list at #10 is the big return of Phil Ivey to the felt.

After an extended period of time out of the poker spotlight in 2011 highlighted by his boycotting of the World Series of Poker, Ivey returned to the felt with regularity in 2012. Right from the get-go, Ivey was back in the driver seat looking to add to his immense poker legacy, and it all began at the 2012 Aussie Millions.

It had been over a year since Ivey's last recorded tournament cash, but his skills didn't look the least bit rusty as Ivey poised himself for a deep run in the Aussie Millions Main Event. From a field of 659 players, Ivey found himself in the final 12 on Day 5 of the tournament. He would eventually be the first to bust on the day, but the 12th-place result earned him a big score of A$100,000. Ivey wasn't done there, though.

Just shortly after his elimination from the Main Event, Ivey hopped right into the $250,000 Super High Roller that began on the same day. Several long hours of action and 15 eliminations later, Ivey stood alone as champion of the event to claim the A$2,000,000 first-place prize. In order to claim the title, Ivey had to defeat several other tough players to make the final table. Daniel Negreanu bubbled in fourth place, and Gus Hansen bowed out in third. Ivey's final opponent was none other than good friend and elite player Patrik Antonius.

When heads-up play began, Ivey held the slight lead with 2.2 million in chips to Antonius' 1.8 million. Ivey won a big pot about 45 minutes into the match to extend his lead to 7-1 before the final hand came up that saw Antonius move all in with the

from the button and Ivey call with the

flop put Antonius in front, the

on the turn catapulted Ivey back into the lead, and he held from there.

With his win, Ivey leaped over Negreanu and into second place on the all-time money list at the time. He also further secured his position in poker history as, what many consider, the greatest player on Earth. Even with his absence from tournament poker for so long, Ivey took to the Aussie Millions with a vengeance and put himself right back on top and in the forefront of everybody's mind.

Just a couple months later, Ivey appeared in Monte-Carlo for the PokerStars and Monte-Carlo® Casino EPT Grand Final. Ivey played a few events there, but only netted one cash. Even just that one cash was worth €73,200 to Ivey as he took ninth place in the €25,000 High Roller from a field of 133.

For many players, finding the motivation to keep pushing through with a heavy slate of tournaments may be hard to do when you've already won over $2,250,000 on the year, but not Ivey. He made his return to the WSOP in June and did so as a force. Not only did he play a ridiculous amount of poker with 45 events, but he cashed seven times and made five final tables.

Ivey's first cash of the summer was a small one for $5,295 in Event 14: $1,500 No-Limit Hold'em Shootout, but then things really started to take flight. Ivey final tabled Event 15: $5,000 Seven Card Stud Hi-Low Split 8-or-Better for a seventh-place finish worth $34,595, and then found himself heads up against Andy Frankenberger for the title of Event 17: $10,000 Pot-Limit Hold'em. Frankenberger eventually went on to win the event, but Ivey did take home $275,559 for his efforts.

Ivey at the final table of WSOP Event 24

All of Ivey's WSOP final tables this past year came in the month of June, and it seemed like he appeared at one every other day. In fact, all five of them fell within a two-week window. During that time, the buzz inside the Rio All-Suite Hotel & Casino was absolutely stunning. Ivey's constant chase for another piece of WSOP gold electrified everyone in the poker community and really proved that Ivey was back and not messing around. It was truly a time to just sit back and take everything in, as another few chapters were being written in poker's history books.

Looking back, this was one of the greatest WSOP performances ever, but didn't deter stopping just yet and locking up a big year. In August, Ivey from adding another massive six-figure score.

The big games in Macau were building and building as all the rave in poker, and in 2012, a $250,000 Super High Roller was held called the Macau High Stakes Challenge. A star-studded field of 73 players created 94 entries and a massive prize pool of $23,511,128. When the final table was formed — you guessed it — Ivey was there.

Ivey began the final table sixth in chips of the remaining eight players, but was the first to fall. On his final hand, Ivey was all in with the

for Tang Zheng. After a board of 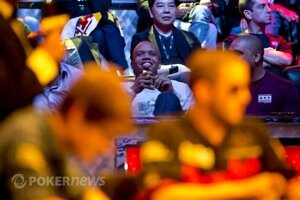 Furthermore, Ivey launched a new website in 2012, IveyPoker.com. The site is dedicated to teaching people how to play poker the "right way," and Ivey has been working to form a team of pros who will provide free, downloadable video instruction to the poker community. Of those currently signed to the team are Antonius, Greg Merson, Jennifer Harman, Cole South, James Dempsey, Matt Giannetti, Balazs Botond, Gillian Epp, David Peters, Josh Brikis, John Eames, Jonathan Tamayo, Mike Leah, Alex Bolotin, Matias Gabrenja and Justin Pechie, and there are plans for even more names to sign. In support of one of his most notable signings with Merson, Ivey was there at the WSOP final table to support the eventual champion from the rail.

With all of Ivey's success in 2012, he's going to have his work cut out for him in 2013. Between trying to win millions in Macau, chasing his ninth WSOP gold bracelet and further developing IveyPoker.com, Ivey will surely have his hands full.