The Penn & Teller Theater exploded when the

completed the board. As confetti began to pour down from the ceiling, fans, drunk off of alcohol, excitement, and delirium alike, attempted to rush into the final table area. Rather than celebrate with them, Greg Merson stiff-armed his friends and family like a Heisman-winning collegiate running back. The 2012 World Champion then made a b-line for Jesse Sylvia, and shook his hand.

“How did I actually pull this off?” Merson told PokerNews.

Prior to the 2012 World Series of Poker, Merson’s largest career live cash was for $23,500 at the 2010 PokerStars Caribbean Adventure. His lifetime earnings totaled only $113,227, and Merson nearly matched that in Event #28 $2,500 No-Limit Hold’em – Four-Handed. He bubbled the official final table when his

couldn’t hold up against Brendan Rubie’s

Less than three weeks later, the grinder from Maryland not only made his first ever WSOP final table, he also won the coveted gold bracelet. Merson defeated Keith Lehr heads up in Event #57: $10,000 No-Limit Hold’em – Six-Handed, pocketing $1,136,197. After his victory, he spoke with our very own Lynn Gilmartin.

“I got fifth in one earlier this year,” Merson told Gilmartin. “I didn’t know, like, how many years it would take for me to get back to have a shot.”

Little did Merson know, it would only take him 11 more days to reach the biggest final table in all of poker.

The WSOP Main Event wasn’t always a smooth ride for Merson, however. On Day 5, he was crippled by Fabrizio Gonzalez on a flop of

. Gonzalez flopped a set with

, Merson had middle pair and an ace-high flush draw with

, and Gonzalez held as the turn and river came

respectively. Merson was left with less than two big blinds.

He doubled the very next hand, then doubled again through Gonzalez a few hours later. Incredibly, he bagged 945,000 chips at the end of Day 5, which was more than an average stack.

From there on out, Merson was in cruise control – unless he was in a hand against eventual 10th-place finisher Elisabeth Hille. On Days 6 and 7, Merson knockout out Vanessa Selbst, Jean Malherbe, Webber Kang, Cylus Watson, Wilfried Harig, Danny Wong, and Marc-Andre Ladouceur. The Watson knockout followed a massive hand, in which Merson doubled through Watson. With the blinds at 80,000/160,000/20,000, Watson opened to 350,000 from under the gun. Merson three-bet to 775,000, and the action folded back to Watson, who four-bet to 1.9 million. Merson five-bet jammed for 7.2 million, and Watson tank-called.

With over 14.5 million chips in the middle, the dealer delivered the flop, turn, and river:

. Watson was left with just 945,000, while Merson became one of the chip leaders. Merson won another massive pot off of Harig when the German called the American’s 8.385 million-chip all-in bet on a board of

onto the felt for a queen-high straight, and Harig showed

for an inferior straight.

When the dust settled after Day 7, and all the chips were counted, Merson bagged the third-most chips (28.725 million) of the 2012 November Nine. He also took the lead in the 2012 WSOP Player of the Year race, but that lead was short-lived.

Merson traveled to Cannes, France for the World Series of Poker Europe at the end of September, looking to either extend or protect his lead, but the November Niner bricked every tournament he played. He also lost his lead in the POY race when Phil Hellmuth won the WSOPE Main Event. Entering into the final table of the Main Event, the only way Merson could become the POY is win.

He retweeed the following from David Baker after Hellmuth took the lead:

Despite entering the final table of the Main Event third in chips, it appeared that Merson was the favorite to win. In the 2012 October Nine PokerNews Staff Predictions, four of the six contributors chose him to win. With a shot of the POY award looming, all eyes were on the 24-year-old cash grinder. 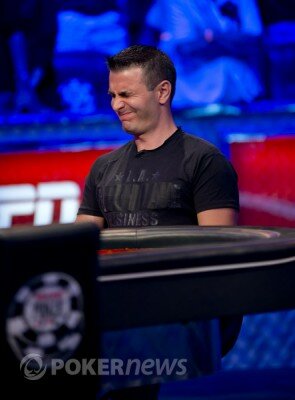 Merson started off slow, losing around 25 percent of his stack in the first 22 hands of play. In a press conference held after the tournament, he admitted that he was a little bit worried:

“I had one dream that I got eight place – isn’t that weird?” he told the media. “And it was four days before the tournament started, so it was freaking me out. Then I started off doing so bad. I lost 7 million [chips] right away, so I was like ‘f---!’”

Merson then made a flush against Michael Esposito on Hand #28, then busted him a few orbits later on Hand #70. Suddenly, Merson was the chip leader. Jesse Sylvia, who entered the final table as the chip leader, eventually bolted back up to the top of the counts, but on Hand #109, Merson won a massive, 80 million-chip pot.

With the blinds at 250,000/500,000/50,000, Merson min-raised to one million on the button. Sylvia three-bet to 2.6 million from the small blind, and Andras Koroknai cold four-bet to 5.3 million from the big blind. Merson five-bet to 9.2 million, Sylvia folded, and Koroknai moved all in. Merson quickly called.

Once called, Koroknai scrunched his face and tabled

, which was crushed by Merson’s

At the time, Daniel Negreanu fired off this tweet:

Merson wins that pot and my phone rings. It's @phil_hellmuth "They are just giving him chips man! I'm going to finish 2nd again" HAHA!October 30, 2012
ReplyRetweetFavorite
Follow

Merson ended Day 8 as the chip leader with nearly half of the chips in play, and although Day 9 was a marathon, he never dipped below 60 million chips. On Hand #382, he eliminated Jake Balsiger with

against the 21-year old’s

, and Merson was the World Champion and the Player of the Year - a feat that no other player has achieved since the award's inception. 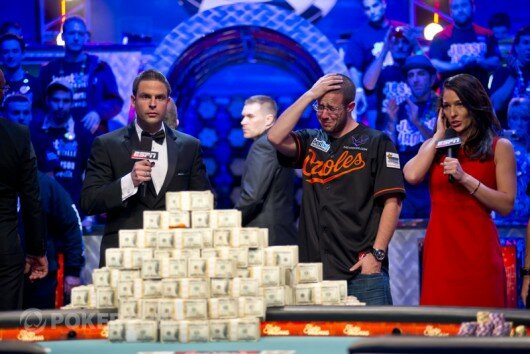 Merson fights back tears of joy as Jack Effel prepares to present him with the bracelet.

We asked Merson what his favorite moment was from that night.

“Giving the bracelet to my Mom on stage,” he told PokerNews. “She’s always been my biggest supporter.”

In an abrupt, post-win press conference, Merson told the members of the media that he doesn’t really like tournaments. He also admitted that he’s ready to go to Macau and compete in some of the biggest cash games in the world. We asked him when the big move was going to happen.

“I’m going to Macau in early 2013 for my first trip,” Merson responded. “I’d like to keep my travel dates undercover for now.”

In the meantime, Merson is focused on his venture with IveyPoker.com. At the WSOP Main Event final table, Merson wore a very large patch for the site, and Mr. Phil Ivey himself was railing alongside fellow “Team Ivey” member Jennifer Harman.

“I can’t really comment on the IveyPoker.com business model yet,” Merson admitted. “But I am super excited about being one of the major faces on the team, and I look forward to helping to put this company on the map.”

Most importantly, Merson recently celebrated one year of sobriety. His battle with drugs was widely publicized after ESPN ran a feature piece about it during their coverage of the 2012 WSOP, and Merson has never shied away from answering questions about addiction or recovery alike. To him, his sobriety is paramount.

“None of my success could have been accomplished without being 100 percent clear in the head at all times,” he told PokerNews. “I care more about my sobriety than anything else in the world, and if I ever let that slip I risk losing everything I’ve worked so hard for.”

Despite admitting his dislike for tournament poker, Merson plans to attend the tenth annual PCA in January.

Perhaps the World Champion will kick off 2013 with a bang. 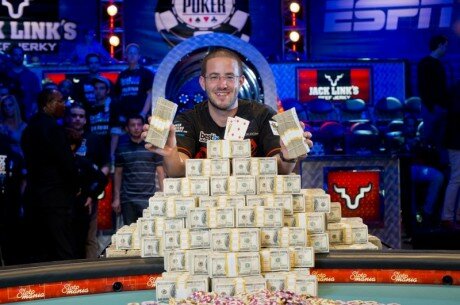