As 2014 approaches, PokerNews is moving through its list of Top 10 Stories of 2013. We've made it to the top three, and coming in at the No. 3 spot is the outstanding year had by German players on the felt.

Like the powerful Deutsche Bundesbank, German professional poker players had no troubles printing money during the 2013 campaign.

Atop the German poker hierarchy are five individuals who have been grouped together under the title “Team Germany.” Together, Philipp Gruissem, Tobias Reinkemeier, Igor Kurganov, Fabian Quoss, and Niklas Heinecker earned an astounding $17,090,719 in live tournaments in 2013.

On top of his live tournament earnings, Heinecker has crushed online, winning over $6 million.

If you remove the 2013 World Series of Poker Main Event and One Drop High Roller results from the 2013 money list, Gruissem and Heinecker would land at Nos. 1 and 2, respectively.

Ole Schemion isn’t as tight with the aforementioned quintet, but the 21-year-old German had a banner year of his own. Despite not being old enough to play in the 2013 WSOP, he banked $1.65 million and earned the Global Poker Index Player of the Year title.

On the virtual felt, Germany dominated the World Championship of Online Poker Main Event as well. None of the aforementioned live grinders made deep runs, but the top three finishers all represented Deutschland. “PlayinWasted,” Daniel “Allanon85” Drescher, and “SwissCantMis” made a three-handed deal, and all walked away with over $1.1 million.

The Year of the Germans started at the PokerStars Caribbean Adventure, Where Reinkemeier and Schemion finished seventh and fourth, respectively, in the $25,000 High Roller, and Gruissem finished fifth in the $100,000 Super High Roller. After the PCA, Team Germany took the party Down Under to Melbourne, Australia for the Aussie Millions, where they made an even bigger splash.

The group took a well-earned holiday in February, and then returned to the felt in London in March. Reinkemeier (sixth) and Kurganov (16th) cashed in PartyPoker Premier League VI, and Quoss finished third in the EPT London High Roller.

In their return trip to Australia for the WSOP Asia-Pacific, only Gruissem cashed, but he made it count. The man nicknamed “philbort” took down the $50,000 High Roller Rebuy, pocketing $863,386.

Meanwhile, in Lebanon, Schemion locked up his first win of the year in April. The then 20-year-old shipped the Lebanese Poker Tour Main Event, earning $201,206.

All five of these Team Germany players met up in Monaco for the PokerStars and Monte-Carlo® EPT Grand Final, where another German player, Max Altergott, won the €100,000 Super High Roller for nearly $2.3 million. Schemion took down three side events for a total of $226,060.

In May, Team Germany chose to skip the start of the WSOP and traveled to Macau for the GuangDong Asia Millions Main Event. Heinecker won the colossal event, earning over $4.4 million, and Kurganov finished sixth for just over $1 million.

All five of the Germans who were eligible to play in the WSOP bricked the One Drop High Roller, but Quoss (17th) and Kurganov (11th) both cashed in the $25,000 buy-in six-handed event. Anton Morgenstern, a German who was reportedly backed by members of Team Germany, had the chip lead entering Day 7 of the WSOP Main Event. Unfortunately he was somewhat “coolered” by Mark Newhouse, and exited in 20th place for $285,408.

Reinkemeier broke a seven-month drought in October, finishing runner-up in the EPT London €50,000 Super High Roller, and he, Kurganov, and Gruissem all cashed in the second ever Alpha8 event. Gruissem won, earning $1.3 million.

A few weeks later, in St. Kitts, Gruissem won the next Alpha8 as well. That victory was good for just under $1.1 million.

Schemion capped off the year by cementing his GPI POY title in the Czech Republic. Despite trailing Daniel Negreanu by a considerable margin, the young German finished fifth in the EPT Prague Main Event — a 1,007-player field — earning just under $300,000.

To further illustrate how insane these six players performed in 2013, here’s a table of earnings, final tables, and wins:

The members of Team Germany are obviously extremely talented, but they benefit from pooling finances. It’s widely known that all five members swap pieces of one another, which means they simultaneously protect themselves from variance and benefit from profit sharing. These five sharks are also known to buy shares of other players in large buy-in events, further diversifying their investments.

During the 2013 WSOP Europe, Negreanu said he wasn’t sure if he was going to participate in the 2014 Big One for ONE DROP.

This made Byron Kaverman chuckle.

“The Germans will buy up the rest of your action,” he told Negreanu.

Despite swapping pieces with one another and buying pieces from several of their opponents, there is little concern that the Germans are colluding. Mohsin Charania even said on the PokerNews Podcast that it’s next to impossible Team Germany is in “cahoots.”

Time will tell if these results from the German grinders are sustainable. In high roller and super high roller events where they make up a large percentage of the field — and their investments increase this percentage — it’s hard to see the Germans struggling. Unless wealthy businessmen start winning these big events, Team Germany is certain to have a piece of any professional poker player that makes a deep run.

January is a big month for large buy-in events with the PCA and Aussie Millions, and with the introduction of the Alpha8, there are even more six-figure events scheduled for the New Year. 2014 also marks the return of the $1 million buy-in Big One for ONE DROP at the WSOP, which the Germans are gearing up to conquer.

The Germans dominated 2013, and there’s no telling what they will do during the next 12 months.

Stay tuned for more of the Top 10 Stories of the Year right here on PokerNews. 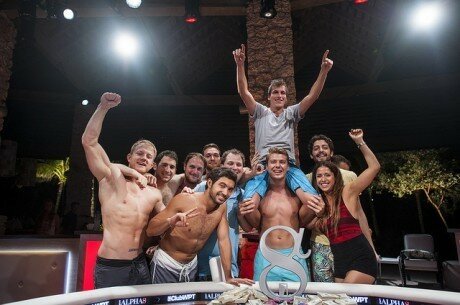