It's been an amazing year for young gun Yevgeniy Timoshenko, but on Tuesday he confirmed his place as one of the world's finest all around poker players with a remarkable double. The PokerStars 2009 World Championship of Online Poker (WCOOP) came to a close as day two of the Main Event saw Timoshenko, playing under the handle “Jovial Gent”, claim the world's most prestigious online title. The $5,200 tournament saw 2,144 participants enter to create a total prize pool of $10,720,000 and a first-place payday of $1,715,200. The chip leader entering the final table was none other than Dan “djk123” Kelly, fresh off his win the night before in the high-roller H.O.R.S.E. event. Timoshenko surged to the chip lead and never looked back. The key hand of the final table came when four-handed as “djk123” and “Jovial Gent” got into a preflop raising war, with Kelly five-betting all-in with

and flopped a third king. No miracle came for “djk123” and his incredible 2009 WCOOP ended with a fourth-place finish in the Main Event for US$643,200. Timoshenko then held a very healthy chip lead and extended it even further when he busted “reddeevil” in third place which left “Udon Wannit” and “Jovial Gent” to duke it out for the Main Event bracelet. With over a 3:1 chip lead, Timoshenko made quick work of the heads-up battle which was over in just 18 hands. Timoshenko called a raise out of the big blind and the flop ran out

, which was snap-called by Timoshenko’s dominant 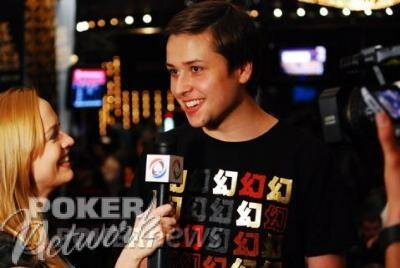