All three players are back in their seats and cards are in the air!

The three remaining players are now on break. We will try to crown a champion when they get back in 20 minutes.

Ever since 3-handed play began, action has been rather slow, with most hands being a "raise it and take it" or a walk. With blinds due to rise again soon, it will only be a matter of time before the action picks up. Stay tuned. 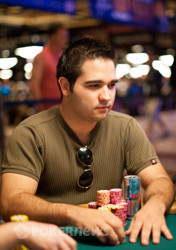 In case you forgot how brutal a game poker can be, this will remind you. Patricia Baker and Ray Pulford just dueled in back to back hands that led to the stunning elimination of Pulford, who was the chip leader for much of this final table.

On the first hand, Pulford limped on the button, Baker called in the small blind, and James Routos checked his option. Baker checked in the dark before the flop came down

. Routos checked as well, and Pulford bet out 40,000. Baker was the only caller, and the turn came the

. Baker moved all in for 144,000, and a clearly upset Pulford threw his hand into the muck, saying "I flopped the nut straight!"

Now here's the brutal one. Baker limped in from under the gun, and it folded around to Pulford, who decided to check. The dealer fanned out a flop of

, and Pulford checked to Baker, who fired out an over bet of 80,000. Pulford made the call, and the turn came the

. In the blink of an eye, Pulford checked, Baker moved all in, and Pulford snap called. The cards were flipped, and Pulford had trapped Baker to perfection.

Baker had turned two pair, but Pulford had flopped bottom set. Baker would need a queen or an eight to take down the pot and pull out an incredible suck out. Well I'm sure you can guess what happened.

An understandably frustrated Pulford said, in not so kind words "are you kidding me?!?!" When the stacks were counted, it was determined that Baker had more, and Pulford hit the rail in truly stunning fashion.

We are now three handed, with Chaib Saechao holding half the chips in play.

Chiab Saechao opened to 45,000 from the button and found one caller in Patricia Baker in the big blind.

and Baker check-called another 45,000 bet from Saechao.

fell on the turn, Baker led out for 100,000, only to have Saechao shove all in, which was enough to put Baker all in. Baker fell hard into the tank.

"I think you're just trying to blow me off my hand," Baker said. 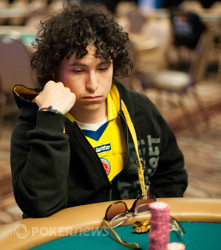 Well that was sudden. On the very next hand, Chiab Saechao limped in under the gun, and action folded all the way around to Nicolas Vaca-Rondon. He moved all in for around 200,000, and Saechao insta-immediately-snap called, and yelled "aces"!

The flop brought a couple scary looking cards, but it was safe for Saechao, coming

. Saechao told the dealer to keep it high, and the

on the turn was right in like with his request. The river was the

, and Saechao increased his chip lead, while Vaca-Rondon went to the rail.

Ray Pulford raised it up to 46,000, and Patricia Baker moved all in for 141,000 on top. Action folded around to Pulford, who went deep into the tank. After about 20 seconds of thinking, Baker began goading Pulford. She said, "I want you to call. I know you want to call go ahead I have the best hand." Pulford thought for about 90 more seconds, with Baker chiming in with similar sentiments every 20 seconds or so. Finally, Pulford tossed in the call.

Pulford caught a piece of the flop, but so did Baker, as it came out

. Pulford would need to find another pair to secure the knockout, but the turn, the 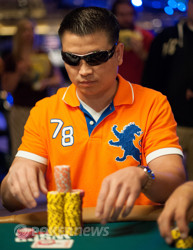 In a blind vs. blind confrontation, Chiab Saechao raised to 40,000 from the small and Ray Pulford flatted from the big.

hit the turn, Saechao led out for 40,000 and Pulford called.

fell on the river and Saechao checked a final time. Pulford tossed out a 75,000 bet and Saechao said, "Let's see it," and tossed in a call.

"You got it," Pulford said and revealed

for a rivered pair of jacks and scooped the pot.