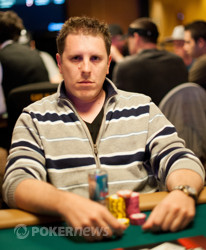 Jay Pinkussohn pulled off a miracle earlier in the final table, when his ace jack cracked the aces of Patricia Baker, but his luck has run out and he's been eliminated. James Routos did most of the damage when he raised from the button, and Pinkussohn moved all in from the big blind. Routos called fairly quickly with

and saw that he had Pinkussohn's

to give Routos a set. Pinkussohn would need runner runner fours or straight cards, but the turn and river came the

Just a few hands later, Baker limped in from under the gun, and Pinkussohn moved all in for about 50,000. It folded back to Baker who made the call. When the cards were flipped, Pinkussohn saw that once again he was dominated.

The dealer fanned out a flop of

that provided no help for Pinkussohn. The

on the turn paired the board, giving Pinkussohn some outs for a chop, but the

on the river didn't bring any help. Pinkussohn headed to the rail, while Baker strengthened her chip lead. 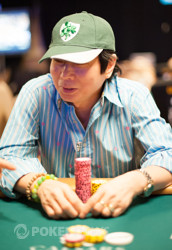 Action began with Jay Pinkussoh, who opened for 30,000 from under-the-gun. Directly behind him, Steven Phan went all in for his last 38,000. Ray Pulford then re-raised to 138,000 total. Everyone else folded, including Pinkussoh and hands were revealed.

and Phan was eliminated.

James Routos came in for a raise to 25,000 in early position, and Chiab Saechao was the only caller in the small blind. The flop came down

, and Saechao led out for 35,000. Routos elected to call, and the turn brought the

. Saechao checked, and Routos took little time in assembling a bet of 60,000. Saechao beat him into the pot, and the two saw the

hit the river. Saechao quickly checked, and Routos checked as well after about 15 seconds of thought. Saechao grimmaced, and showed a failed trap, as he tabled

for a rivered boat. Routos mucked, giving the pot to Saechao.

After the hand, Saechao is over 300,000, while Routos, who has been one of the big stacks all day, is now one of the short stacks.

and Saechao checked, prompting a 55,000 bet from Pulford. Routos mucked and action was on Vaca-Rondon, who announced he was all in for about 170,000. Action folded back around to Pulford, who called and said, "If it's a set you're good."

river left Vaca-Rondon with quads as he doubled and then some to about 390,000. 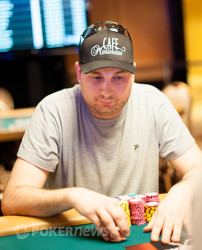 Patricia Baker limped in from the cutoff, and it folded around to Matthew Wilmot in the big blind, who checked his option. The flop came down

, and Wilmot quickly checked to Baker, who bet out 50,000. Wilmot thought for just a few moments before check raising all in. Now it was Baker's turn, and she too thought for about five seconds before calling! The cards were flipped, and Baker had flopped a monster.

. Wilmot shouted for another five, as that would counterfeit Baker's two pair, but it was close but no cigar for Wilmot, as the

hit the river. Wilmot was sent to the rail, while Baker breaks the 500k mark, and is our new chip leader.

Pinkussohn Catches a Miracle to Double Through Baker

In what was likely Jay Pinkussohn's luckiest hand of the tournament so far, Patricia Baker limped from under-the-gun and action folded around to Pinkussohn, who announced he was all in for his last 114,000. Baker quickly called and announced, "Red rockets!"

Baker was an overwhelming favorite going to the flop, which came

, giving Pinkussohn hope to catch one of the two remaining jacks in the deck.

fell on the river and Pinkussohn doubled to about 240,000. 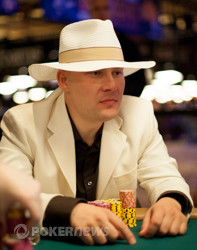 It was a nightmare return from the dinner break for Georgi Ivanov, who is the first casualty of our final table. On the hand that did most of the damage, Patricia Baker and Ivanov both limped in. It folded around to Chiab Saechao, who went all in for 86,000. Ray Pulford folded his big blind, and Baker folded as well. However, Ivanov snap called, and Saechao was shocked to see that he was well out in front when the cards were flipped.

Ivanov gave a celebratory yell when he saw a jack in the window, but he spoke too soon, as the flop was dealt out

. Ivanov would need a miracle to win the hand, but it wouldn't come, as the board completed

That stack went in two hands later, and Baker and James Routos were the only callers in the blind. The flop came down

. Baker fired out 50,000, and Routos folded. When the cards were flipped, Ivanov saw that he was in the lead.

on the turn gave Baker flush draw outs as well, but she wouldn't need them, as the

hit the river. That send Ivanov to the rail, and he will collect just over $5,000 for his efforts. And just like that, we are down to 8!

Vaca-Rondon Doubles Through Ivanov on First Hand Back From Break

Action folded around to Nicoals Vaca-Rondon in middle position, who open shoved his remaining 90,000 into the middle. Directly behind him, Georgi Ivanov went all-in himself from the hijack position and everyone else folded.

Vaca-Rondon would need help and the

flop did just that, propelling him into the lead with a pair of aces. The

The announcer has introduced the final 9 players, and the cards are back in the air.