Play will be underaway again in about 12 minutes. In the meantime, here is a look at the official final table.

The remaining players are now taking a one-hour dinner break. Cards will be back in the air at 8:20 local time. 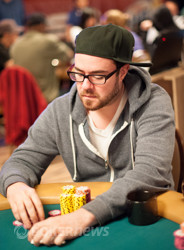 In our first elimination of the final table, Ray Pulford opened to 21,000 from middle position and was called by John Vohs in the big blind.

and Vohs checked a second time. Pulford did not back down and fired another barrel for 50,000. Vohs tanked for a bit, but then announced he was all in for about 130,000 total. Pulford quickly called and hands were revealed.

for an overpair.
Vohs:

river failed to improve Vohs hand and he was eliminated in 10th place.

Action was on the short stack Jay Pinkussohn in middle position, and he open shoved all in for his last 56,500. It folded to Ray Pulford in the cutoff, and he made the call. Everyone else folded, and when the cards were flipped, Pinkussohn saw that he was in front.

, and Pinkussohn was still in front. The

gave Pulford more outs, as a diamond would also give him a win, in addition to the king or the queen. However, the

on the river was safe for Pinkussohn, who doubled back up to over 110,000.

Now that we are under the bright lights of the thunderdome, play has slowed down considerably. We've only seen a few flops, and there's only been one all in and call so far this level. However, with 6 of the 10 players having under 30 big blinds, we expect action to pick up any minute now.

Chiab Saechao raised under the gun to 25,000, and it folded all the way around to John Vohs in the small blind. He tanked for about a minute before giving up his hand, and it was on Steven Phan in the big blind. He looked down at his cards, thought for about 15 seconds, and then announced all in. Saechao SNAP called, and the players flipped their cards to reveal a classic race.

, and Saechao needed a ton of help. The

on the turn gave Phan a set, but Saechao could still catch a ten to make a winning straight. He wouldn't get it though, as the river brought the

In the first hand of this two-hand series, James Routos opened to 20,000 from the hijack position and action folded around to Matthew Wilmot in the big blind, who took a deep breath and shipped his stack into the middle. Action went back to Routos, who slid his cards into the muck.

The very next hand, Routos opened again to 20,000 from middle position. This time, action folded around to John Vohs, who shipped his stack in from the big blind. Routos again didn't waste much time verbally announcing, "Fold." 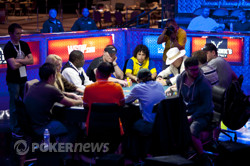