Here is a collection of images of the 2012 World Series of Poker gold bracelets. Enjoy. 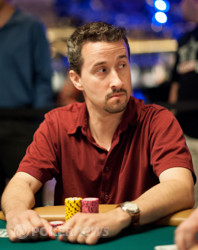 Shortly after doubling up, Chad Patterson found himself in a hand against Chiab Saechao. We caught up on the flop, which read

and Patterson checked from the hi-jack position. Saechao checked behind from the cutoff.

and Patterson checked again, prompting a 25,000 bet from Saechao. Patterson made the call.

The river fell the

and Patterson checked one more time. Saechao quickly announced he was all in for about 62,000. Patterson fell deep into the tank and mulled over his decision for about five minutes. He finally announced call and Saechao triumphantly flipped over

With just 7,000 remaining, Patterson was in the big blind the very next hand. Action folded around to Nicolas Vaca-Rondon in the small blind, who raised enough to put Patterson all in. Patterson called off his remaining 1,000.

flop kept Patterson in the lead, however, a

landed on the turn, giving Vaca=Rondon a straight and leaving Patterson drawing dead. A meaningless

fell on the river and Patterson was eliminated in 11th place.

Action started with John Vohs raising in early position. It folded around to Chad Patterson, who shoved all in for 37,500 more. After Vohs crunched the numbers for a few moments, he reluctantly made the call, but was happy to see that he was live.

Both players got a piece of the flop, as it came down

. Vohs would still need some help to score the knockout, and he got that on the turn, the

. However, the roller coaster was not complete, as the

hit the river, counterfeiting Vohs and giving Patterson a better two pair. Both player are now virtually even at around 140,000 each. 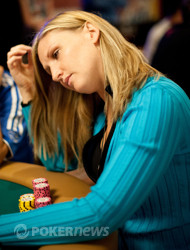 While we were still scrambling after that double elimination, we missed the elimination of Carisa Schweisberger. Ray Pulford was the one who did the deed, and he gave us a brief recap after. According to him, he raised it up to 16,500, and Schweisberger moved all in for 44,5000 total. It folded back around to Pulford, who made the pot committed call with

. He was live, as Schweisberger had

. Pulford said he flopped a pair that held through the turn and the river, and he scored the knockout, leaving Patricia Baker as the last woman standing. 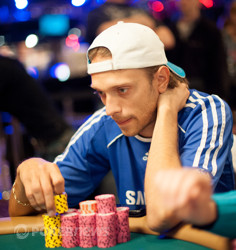 Donald Michael - once the chip leader, now out in 13th place.

And just like that, we're down to a dozen.

In what would be the biggest hand of the evening so far, a very short-stacked Scott Wygal open-shoved for his last remaining chips from under-the-gun. Right behind him, Donald Michael re-shoved his own stack for over 100,000. Right behind *him* Geogri Ivanov announced an all-in of his own, having the previous two players covered. Everyone else folded and hands were revealed.

, which kept Ivanov's big-slick in the lead the entire time as he eliminated two players simultaneously. Keep in mind that when the final two tables began play with 18 remaining, Michael had the chip lead.

Action started with James Routos, who raised to 15,000 in early position. It folded around to Scott Wygal, who pushed all in for around 70,000. Action went around to Georgi Ivanov in the big blind, who put his hands on his head, and said "well I can't fold this. I'm all in." Ivanov had alittle less then Wygal, and Routos quickly got out of the way. The cards were flipped, and Ivanov was well ahead.

Ivanov got up, clearly nervous, and ask the dealer "please be my favorite dealer please!" Well Ivanov loved the dealer after the board ran out

Action began with James Routos, who opened for 14,000 from middle position. Action folded around to Donald Michael in the small blind, who 3-bet to 39,000. Routos decided to flat and see a flop, which came

. Michael c-bet for 42,000 and Routos immediately announced he was all in for 178,000 total. Michael called just as quickly.