We missed the exact action preflop, but we know that Joseph Kearney got the last of his 30,000 chips in holding

, but was dominated by Matthew Wilmot, who held

. Wilmot clapped his hands, and told the dealer "no ace!" The dealer obliged, as the board ran out

. Kearney headed to the rail, while Wilmot scooped the pot, pushing his stack to 200,000.

Check it out and be sure to subscribe on iTunes.

Vohs Takes Out Another; Burns Eliminated

We caught up with the action on a board reading

. John Vohs had a 30,000 bet in front of him from the big blind position and action was up to Robert Burns, who announced he was all in after some deliberation. Vohs snap-called.

Burns would need a ten and only a ten to stay alive. The river bricked out a

, which was too little too late for Burns as he was knocked out of the tournament.

Sometimes, the battle of the blinds can be some of the most boring pots in poker. Other times, it can be the biggest pot of the tournament. The latter was the case just now between Amy Brady and Joshua Murray. Action folded all the way around to Brady in the small blind, and she called. Murray checked his option in the big blind, and the two saw a flop of

, and Brady quickly moved all in. Despite being for all his chips, Murray thought for just a few seconds before calling! The cards were flipped, and Murray was well out in front.

Murray had flopped bottom two pair in the big blind, and would need to dodge a queen, jack, or nine to win the pot. Unfortunately for him, the

slammed down on the river, counterfeiting Murray and giving Brady the massive pot. With that win, she is now the chip leader, with 250,000. 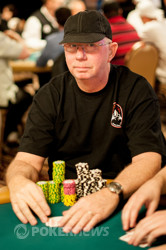 Action began with John Vohs, who opened for 7,500 from early position. Action folded around to Mike Vogel on the button, who re-popped it to around 24,000. Vohs pondered for a bit and then announced he was all in. Vogel quickly called off his remaining stack.

Vogel was dominated going into the flop and would need help to survive. The

failed to improve Vogel's hand and he was knocked out of the tournament.

Kerry Parker went all in from the button for his last 18,000 and found one caller in Chiab Saechao. Everyone else folded and hands were revealed.

board kept Parker in the lead and he doubled up.

These are the most updated counts of the final three tables.

Play has halted momentarily so that the staff can redraw for the top 27. Once all the players have taken their seats, we will get you a full seating chart.