Action started with James Routos, who raised it up to 5,100 from under the gun. The next player to act shoved for about 18,000 total. Georgi Ivanov was next to act, and he shoved for the top for 80,000. Everyone else folded, including Routos, and when the cards were flipped, we were off to the races.

, and Ivanov collected the pot. After stacking up his chips, we saw that he was sitting on around 120,000.

Play has resumed and cards are back in the air.

Time for a Break

Players are now on their first 20-minute break of the day.

In a blind vs. blind confrontation, Joseph Kearney raised to 7,000 from the small and was snap re-shoved on by Scott Wygal in the big for about 23,000 total. Kearney made the call.

leaving Wygal with a pair of aces to scoop the pot and leaving Kearney with just 20,000.

A short stack moved all in for around 15,000, and Ray Pulford was next to act. He decided to just call, and the rest of the table folded. Pulford was in great shape, with his

. The board ran out safely for Pulford, coming 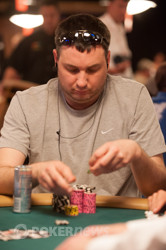 A short-stacked Jacob Wesloski moved all in for about his last 13,000 from the cutoff position and found one caller in Matthew Wilmot from the small blind. Trish Baker folded from the big. Revealed hands showed it was a race situation.

, failing to improve Wesloski's hand and eliminating him from the tournament.

Action started with Amy Brady, who limped in from under the gun. Everyone folded to Paul Chernell in the small blind, who also limped. Russell Matsuo went all in from the big blind for 22,800, and after about 30 seconds of thinking, Brady folded. Chernell eyeballed Matsuo's stack for about 30 seconds before announcing call. The cards were flipped, and Chernell was in great shape.

Matsuo was not happy to see that he was dominated, but he raced out in front when the flop came down

. Chernell would need the last remaining ten in the deck to win, or a jack to split the pot. The turn was the

, and Chernell would need a miracle. It didn't come, as the river brought the

Wortham Coolered Out of the Tournament

We caught up with the action after a series of preflop bets and raises, with David Wortham going all in and Amy Brady snap-calling.

Wortham grimaced, knowing his tournament life was in dire straights.

board changed nothing and Wortham was sent to the rail.

Vaca-Rondon Off To Good Start

We have our first elimination of the day. We missed the action, but when we got to the table, we saw that the rest of Andre Rauch's chips were being sent over to Nicolas Vaca-Rondon. Vaca-Rondon had