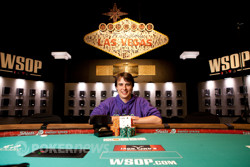 After three days of skilled Pot-Limit Omaha play, Event 11 of the World Series of Poker has came to an end. Some 970 players entered the tournament and only nine returned for the final day. Dutchman Vincent Van Der Fluit has claimed his first gold bracelet and $265,211.

The final table was an international affair and returned players from five different countries. Tristan Wade was the only returning WSOP bracelet winner but he had stiff competition with high stakes player Van Der Fluit. Charles Tonne returned as the chip leader for the second day in the tournament.

The first casualty of the final table was David Schnettler. He was one of the returning short stacks and found himself facing a call for his tournament life on a flop of

. He called and Alex Dovzhenko had flopped the nut straight. Schnettler held

and needed some help from the deck. It would not come when the board completed with

The lone Canadian at the final table, Brian Garbe, entered the final table with the shortest stack. Tonne opened from under the gun and Garbe made his final stand and shipped it in holding

and the board ran

The quick action kept pace when Rodney Brown moved all in just 15 minutes after Garbe’s elimination. The flop was

Dovzhenko had been the most active player at the table and his luck would run out when he got involved with Tonne. They saw a flop of

, Dovzhenko potted and Tonne re-potted. Dovzhenko was all in with a pair of aces. Tonne flopped two pair and turned a full house. The Russian would leave in 5th place.

There was a half hour breather between the next elimination, giving the frantic pace a pause. On the first hand returning from a break Lhommeau got all in preflop against Tonne and Tonne made a straight, eliminating Lhommeau in 4th place.

and Wade’s pair of queens wasn’t enough to keep him in the tournament. He earned a little over $100,000 for his 3rd place finish.

Heads up play mimicked the rest of the tournament and it was a quick affair. Van Der Fluit and Tonne started at relatively even stacks but Van Der Fluit chipped away at Tonne. In one key hand that set Van Der Fluit up for victory occurred when they saw a flop of

Van Der Fluit then had a three-to-one chip lead and only two hands later the match was all over. Van Der Fluit opened to 60,000 and Tonne called. After a

flop Van Der Fluit was check-raised to 315,000. Then all the chips got in the middle and Tonne had only a flush draw with

and Van Der Fluit’s higher flush sealed the bracelet for him. 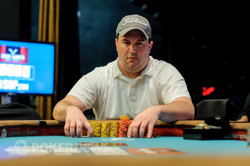 On what would be the final hand of the evening, Vincent Van Der Fluit raised to 60,000 from the button and Charles Tonne made the call.

turn sealed the deal for Van Der Fluit - giving him an unbeatable higher flush. An irrelevant

landed on the river and Tonne's impressive run was put to an end.

Vincent Van Der Fluit opened for 60,000 from the button and Charles Tonne called. The flop came

, Tonne checked and Van Der Fluit cut out 350,000 to put in the middle. Tonne tanked for a short while and then called.

for a full house and Tonne mucked.

Color Up and Counts

Now that we are at then end of the 23rd level, all of the yellow $1,000 denomination chips have been colored up.

Van Der Fluit Earns Some Back 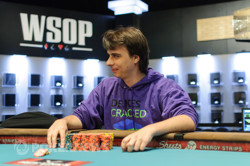 Tonne Takes a Big One From Van Der Fluit

Charles Tonne raised to 50,000 from the button and was 3-bet to 150,000 by Vincent Van Der Fluit from the big. Tonne flatted to see a flop, which came

Van Der Fluit continued his aggression and led out for 165,000. Tonne called.

fell on the turn and Van Der Fluit opted to slow down and check, prompting a 225,000 bet from Tonne. Van Der Fluit made the call.

landed the river. Tonne thought it over and pushed a 300,000 bet into the middle, sending Van Der Fluit deep into the tank. He eventually flung out a call and Tonne showed