Hastings Takes it On The Turn

Jason Mo started off by raising his button to 60,000 and Brian Hastings called. The flop came down

Three Bets Do It

In back to back hands both players just won a three-bet pot. On the first hand Brian Hastings raised to 60,000 and Jason Mo took down the pot with a re-raise to 180,000 and on the very next hand the same action occurred and Hastings took down the pot.

Brian Hastings started off with the button and he raised to 60,000 and Jason Mo called. The flop came down

On the river the

popped up and after Mo checked Hastings moved all in for 920,000 chips. Mo tanked for a while before realeasing his hand and cashing in his first lammer. Hastings takes an early lead since he still has two lammers left behind.

The cards are in the air for this final match between Brian Hastings and Jason Mo.

The final table is set for the $10,000 Heads-Up No-Limit Hold'em Championship event. Brian Hastings will face off against Jason Mo at 3:45 PM local Las Vegas time. Stay tuned for one final match of heads up play!

Both finalist are already assured of winning $229,722, but they are gunning for that sweet $371,498 first place prize which will be waiting for the winner of this event! 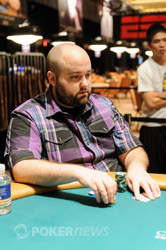 On the final hand of this semi-final Jason Mo raised to 160,000 from the button and Brock Parker called. The flop came down

and Parker checked. Mo threw out a 185,000 chip bet and Parker moved all in. Mo called right away and tabled

. Parker was trailing with

but he still had outs and a back door flush draw. The turn was the

and Jason Mo's friend went from rooting for a deuce to shouting, "Oh my god, oh my god!".

and that ended Parker's run in third place. Mo was very pleased with his victory and he will match up with Brian Hastings for a chance at winning a gold World Series of Poker bracelet! 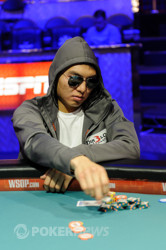 Tommy Chen had the button and raised to 160,000 and Brian Hastings moved all in from the big blind. Chen called the all in for his remaining 900,000 and we were off to the races.

. Hastings jumped ahead, however, when the

peeled off on the turn and paired him up. The

came on the river and was of no help to Chen, and he was eliminated in fourth place, taking home $130,606 in prize money.

Brock Parker raised the button to 120,000 and Jason Mo called. The flop came down

showed up and Mo checked again. Parker bet 375,000 and after tanking for around two minutes Mo called.

and looked confident, but Mo showed

and took down the pot. "Was that a slow roll?," Douglas Polk shouted from the rail. "I thought you had like a weak king or something," he added after which both Mo and Parker started laughing. Parker is down to around 1,000,000 chips.