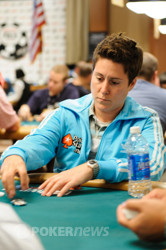 After three exciting rounds of heads-up poker, the first day of the $10,000 Heads-Up No-Limit Hold'em has come to an end. There are 32 players remaining out of the 152-player field, all of whom are in the money. The day started with a short delay as many last-minute registrations were able to get into this event. After the draw was posted, 48 of the 152 players weren't amused as they had to play the first round. The remaining 104 players received a bye securing their seat in the second round.

Among the notable losers in the first round were Matt Marafioti, Sam Trickett, Jason Koon and Vanessa Rousso as Jason Mercier, Chris Moorman, David "Doc" Sands and Matt Perrins moved onto the next round. The real action started as the field got down to 128 and we had a full bracket of players to follow.

Sands, Phil Ivey and Justin Bonomo were among the first players to win their second round match while Andy Frankenberger, Shaun Deeb and Vladimir Shchemelev each busted. Today also marked the World Series of Poker debut of online superstar Viktor 'Isildur1' Blom who proved he could also play live during the 2012 PokerStars Caribbean Adventure when he won the $100,000 Super High Roller event banking just over $1.2 million. Blom beat Andy Bloch in the first round, but had to admit defeat in the second when he lost against Tommy Chen. Other notables that lost their second round match were Yevgeniy Timoshenko, Victor Ramdin, Erik Seidel and 2009 Heads-Up Championship winner Leo Wolpert.

With the field down to 64, all players had to win just one more match in order to cash for $10,966. Steven Landfish was the first player to reach the money when he beat Peter Jetten by rivering a straight against a turned set. Scott Baumstein didn't have a lot of trouble with Victor Ilyukhin, who called a big shove from Baumstein preflop with jack-ten. Baumstein watched his ace-deuce hold up and give him a seat in the fourth round. Richard Lyndaker took out the 2010 WSOP Player of the Year Frank Kassela. Lyndaker had flopped a straight when the money went in and Kassela's pair and gutshot couldn't catch up. We also said goodbye to 2010 Heads-Up Champion Ayaz Mahmood and 2011 Champion Jake Cody in the round of 64.

Daniel Negreanu beat Faraz Jaka in the second round and got another top opponent in the third matching up with heads-up specialist Jonathan Jaffe. Negreanu lost a big pot halfway through the match when both players had made a full house and the money went in on the river. He didn't recover and lost his last chips with fives against aces.

Other big names to make it to the round of 32 are Brian Hastings, Brock Parker, Eric Froehlich and Vanessa Selbst. The biggest upset came when Phil Ivey lost against the unknown Chae An. Ivey got it in good with ace-king against ace-seven, but a seven on the flop send him out the door.

We will come back tomorrow with the final 32 players and play until there are just four players remaining. The first round will take place at 1:00 PM local time followed by the second round at 4:00 PM and the final round at 7:00 PM. These are the payouts the remaining 32 will be fighting for.

Be sure to join us right here on PokerNews for all of the action starting tomorrow. In the meantime, be sure to check out our coverage of the other WSOP events happening on our Live Reporting Pages. 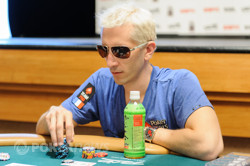 After a series of raises Bertrand Grospellier found himself all in and at risk against Darren Elias. Grospellier was behind as his

wasn't up to snuff to Elias'

. The board blanked out for "ElkY" and he was subsequently eliminated.

O'Donnell Takes It Down

George Wolff moved all in preflop from the button and was called by Ryan O'Donnell.

board running out O'Donnell was awarded the pot.

Kevin Saul raised to 6,000 from the button and Tom Marchese decided to three-bet him to 12,000. Saul moved all in and Marchese made the call putting his tournament life at risk.

giving Saul a winning pair of queens. Saul moves on to the next round in which he will play against Vanessa Selbst.

We do not know exactly how it went down, but we know we will be seeing Serkan Kurnaz tomorrow as he has just knocked out Brandon Steven. 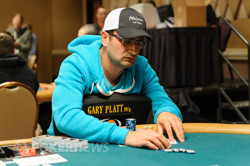 Jacob Godshall has just been eliminated by Antonio Esfandiari. The magic man moves on the the fourth round and already secures a min-cash with this victory.

Everyone that advances from today will be in the money and return tomorrow to play at 1:00 PM for even more cash.

Russell Rosenblum raised to 6,000 from the button and Andrew Lichtenberger decided to put his opponent all in. Rosenblum sighed and thought for around ten seconds before he calmly announced the call.

and Rosenblum was in trouble with

giving Lichtenberger the win and a spot in the fourth round.