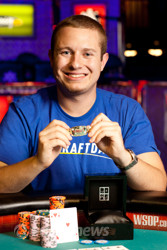 We began Event 12, the $10,000 Heads-Up No-Limit Hold'em, with 152 players. After 151 matches, only one emerged with an undefeated record. 24-year-old Brian Hastings outlasted the field, capturing his first World Series of Poker gold bracelet and a $371,498 pay day. Known for his high-stake online cash-game wizardry, Hastings has certainly made his mark in the live poker scene with his triumph.

On Day 2 he faced three opponents and one by one he took their chips. It started with a victory against Tommy Vedes after Hastings sprinted to a sizable lead. On the final hand, Hastings'

to set up a match with Amritraj Singh. His longest match of Day 2, Hastings defeated Singh after the two got their chips in the middle after a

for a flush draw against Singh's

for a weaker flush draw and top pair. It wouldn't be a queen or flush that won it for Hastings, but rather the

river that gave him trips to earn a seat in the elite eight, where he faced Jeffrey Gross.

Despite finding himself down 4:1 in chips at one point (with one lammer behind), Hastings recovered to defeat Gross after the latter committed his last chips with

His Day 3 went about as smooth as possible. At no point did he have to use either of his lammers in his final four match against Tommy Chen and championship match against Jason Mo en route to his winning the bracelet. Within minutes of his match against Chen, Hastings took Chen's first buy-in and it wasn't long before he took the second. From there, Chen battled back with his last lammer to take the chip lead. However, Hastings doubled up with

when it held against Chen's

all in preflop. He closed out the match shortly thereafter with

all in preflop. The board ran out

to pair Hastings' ten and give him a shot at winning the bracelet.

His final match against Jason Mo was mostly a one-sided affair. After falling behind in chips immediately, Mo used one of his two remaining lammers and cashed in his last one as his chips began to dwindle again. Just like the match against Chen, Hastings saw his chip lead disappear briefly before doubling with

. The match ended the following hand when Hastings shoved on the button with

and Mo called all in with

from the big blind. The final board came down

, securing the victory for Hastings.

Congratulations to Brian on his amazing accomplishment!