Our final four are on a 20 minute break.

Barbieri Trying To Lighten The Mood 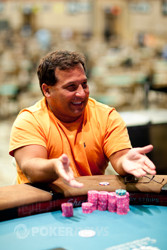 With all four players fairly close in chips, play has been very tight recently. The chips have mostly just moving around the table, and Al Barbieri is doing all he can to lighten the mood and make it more fun. Some of his antics have included offering to sing God Bless America, announcing the new dealer's arrival like Bruce Buffer, and posing as a fountain and spitting water out of his mouth off the stage. We can't make this stuff up.

Stephen Hung limped in under the gun, and David Arsht raised on the button. The blinds folded, and Hung made the call. The flop came down

, and Hung check called a bet from Arsht. The turn was the

, and Hung checked again. Arsht bet, and this time, Hung raised. Arsht called, and the

On the next hand, Arsht raised under the gun, and Hung called in the big blind. The dealer fanned a flop of

, and Hung checked to Arsht, who bet out. Hung check raised for the second consecutive hand, and Arsht called. Hung bet the

on the river, with Arsht calling both time. Hung showed

David Arsht opened under the gun and Donald Auger called from the button. Both blinds got out of the way and Arsht fired out on the

flop. Auger made the call and then raised when Arsht bet the

turn. The latter made the call and then check-called a bet on the

"Aces," Auger said confidently as he rolled over

"You're good," Arsht responded even before seeing the cards. 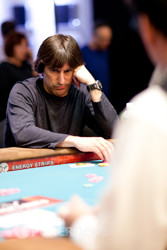 David Arsht raised from the button, and Glenn Engelbert and Donald Augar called in the blinds. The flop came down

, and it was checked to Arsht. He fired out a bet, and Engelbert instantly raised. Auger folded, but Arsht called. The turn was the

, and Arsht called a bet from Engelbert. The

hit the river, and Engelbert checked. Arsht bet out 50,000, and Engelbert went into the tank. He only had 56,000 left, so it was a huge decision. After two minutes of thinking, he flung in the call. Arsht showed

, and Engelbert led out a big sigh of frustration, saying he had

After the hand, Engelbert was left with just 6,000, while Arsht had half the chips in play at 1.6 million. Engelbert tripled up shortly after, but was eliminated a few hands later. Engelbert was all in preflop, and got calls from Al Barbieri and Stephen Hung. The board ran out

. It was good enough to take the pot, and Engelbert was eliminated in 5th place.

A Crazy 10 Minutes for Engelbert

To say it's been an exciting ride for Glenn Engelbert in the last ten minutes would be putting it mildly. After doubling through Stephen Hung, Engelbert squared off against David Arsht in back-to-back hands. Both went to Engelbert as he held

in the first and

Those pot both got to the turn, which allowed Engelbert to chip up to 445,000 and put himself back into contention. He seemed to have momentum on his side, not to mention a newfound confidence, but it all came to a screeching halt a few hands later when action folded to Arsht in the small blind and he raised. Engelbert three-bet from the big, Arsht called, and then the latter check-called a bet on the

Arsht then turned right around and led out on the

turn, Engelbert called, and the

was put out on the river. Again Arsht bet and Engelbert, and the former rolled over

for a flopped straight. Engelbert shook his head and showed

for a rivered set and his third big pair in less than ten minutes.