Action started with Stephen Hung on the button, and he raised it up. Glenn Engelbert raised all in for 59,000 total, and it was on Donald Auger. He made the call, as did Hung. The flop came down

, and Auger checked to Hung, who bet. Auger nodded his head, and mucked his hand. The cards were flipped, and Engelbert was in a world of hurt.

, and the announcer mistakenly said "that doesn't help Glenn." In fact, it was the best card that he could have seen, as it gave him an open ended straight draw. As though the gods of irony were watching from above, the

hit the river, giving Engelbert his straight. Engelbert slammed his water bottle on the table, as if to say "I'm still here" while the rest of the table got a bit of a chuckle out of Engelbert's luck.

Engelbert Mauled by the Sugar Bear

Al "Sugar Bear" Barbieri raised from the cutoff and Glenn Engelbert defended from the big blind. The

turn went bet and check, brining about the

river. This time Engelbert check-called a bet from Barbieri, but he was disgusted when the "Sugar Bear" turned over

Barbieri Back In the Lead

, and the fireworks went off. Barbieri bet out, and Arsht raised. Barbieri put in a third bet, and Arsht wasted little time in putting a fourth one out. Barbieri slammed the chips in for a call, and the turn was the

. From here, action slowed down. Barbieri check called a bet on the turn, and when the river came the

for flopped two pair, and Arsht mucked his hand. After that pot, Barbieri creeped ahead of Arsht, as the two are the clear chip leaders five handed. 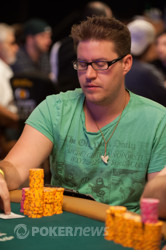 Ben Landowski's nightmare return from dinner break has come to an end. He entered the final table as the chip leader, but he went on a downward spiral in the last 30 minutes that has resulted in his elimination. Action started with Landowski, and he raised. Stephen Hung made it three bets in the big blind, and Landowski called. The flop came

, and Hung bet. Landowski immediately went all in, and Hung made the call.

Landowski had flopped top pair, but it was no good, as Hung held an overpair. Landowski would need another jack, or running spades to win the pot. The turn was the

Ben Landowski raised under the gun only to have David Arsht three-bet from the button. Both blinds got out of the way, Landowski called and it was heads-up action to the

flop. Landowski check-called a bet and then proceeded to do the same on the

and it proved to be good as Landowski mucked, dropping to just 70,000 in the process.

On the very next hand, action folded to Donal Auger in the small blind and he raised. Landowski was in the big blind and three-bet all in with

. Auger made the call with

but was unable to catch as the board ran out

Ben Landowski started things out with a raise, and it folded to Stephen Hung. He put in a third bet, and Landowski called. The flop came down

, and Hung put in the rest of his chips. He had more then the 25,000 limit allowed, but it didn't matter to Landowski, as he quickly folded his hand. Hung had lost some chips before this hand, but now he's back up to 125,000.

Cards are in the Air

The players are back from their dinner break, and the cards are in the air again.

The six remaining players are now on a 60 minute dinner break. Cards will be back in the air at 10:05 PM local time.