Action started with Donald Auger, and he raised it up. Ben Landowski was next to act, and he put in a third bet. It folded back around to Auger, and he called. The flop came all jacks,

, and Auger bet out. Landowski beat him into the pot, and the exact same thing happened on the turn, the

. When Auger was called on the river, he showed

for flopped quads, and Landowski chucked his cards into the muck. 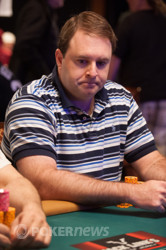 David Arsht put in a raise from middle position and was called by Jeff Weiss and Al Barbieri, who were in the small and big blinds respectively. Action then checked to Arsht on the

Arsht was in the lead with a pair of nine, but the 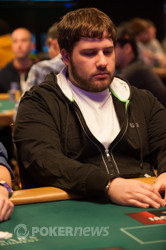 Al Barbieri started the action by raising in the cutoff, and Alex Queen three bet on the button. It folded back to Barbieri, and he made the call. The flop came down

, and Barbieri check called a bet from Queen. The turn was the

, and Barbieri led out for 40,000. Queen had just a few thousand more, and he committed them to the pot. Barbieri called, and the cards were tabled.

The turn was a cooler card, as it gave Barbieri the straight, and Queen a set. Queen would need the board to pair to survive, but the river was the

The Sweet Life for Sugar Bear

Glenn Engelbert raised from middle position and was met with a three-bet by Al "Sugar Bear" Barbieri on the button. Stephen Hung then made the call from the big blind, Engelbert called the the extra bet, and it was three-way action to the

After they had both checked, Hung and Engelbert called a bet from Barbieri before all three checked the

river saw it go check-check to Barbieri and he bet once again. This time both his opponents folded and he took down the pot without a showdown.

After the elimination of Lori Kirgan, play has slowed down immensely. There is no extreme short stack, and there is no dominant chip leader, so for many of the pots, the chips are simply being moved around the table. 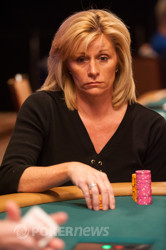 Lori Kirgan was hanging by a thread on the short stack for most of the past couple levels, and her luck has finally run out, as she is the first victim of the final table. Al Barbieri raised it up to 40,000, and it folded to Kirgan, who tossed in her last 38,000. Everyone else folded, and the cards were tabled.

, and Barbieri's straight was good enough to take the pot, and knock Kirgan out in 9th.

Queen Beaten By a Queen

Ben Landowski raised from the cutoff and was met with a three-bet by Alex Queen in the big blind. Landowski made the call and then called a bet from Queen on the

Queen then check-called a bet on the

river, but mucked when Landowski revealed

Action folded all the way around to David Arsht in the small blind, and he raised it up. Glenn Engelbert defended his big blind, and the flop came down

. Arsht led out, and Engelbert called. The turn brought the

, and Arsht bet out again, but this time, Engelbert raised. Arsht didn't slow down, putting out a third bet, and Engelbert called. The river was the

, and Arsht bet out one more time. Engelbert called, and could only shake his head when Arsht showed

for a flopped set.

That pot gives Arsht the chip lead with 670,000, and an interesting note is that while Arsht is the oldest player at the final table, he has been the most aggressive of anyone at the table. Arsht has been putting constant pressure on his opponent all day, and it's paying dividends for him now.