Donald Auger raised from middle position and cleared the field all the way around to the short stack, Lori Kirgan, in the big blind. She put in a three-bet and then bet the

flop after Auger called. The latter called that bet, but then he folded when Kirgan bet her last 22,000 on the

Action folded to Donald Auger in the cutoff, and he raised it up. Al "Sugar Bear" Barbieri defended his big blind, and the flop came down

. Both players checked, and the

hit the turn. Barbieri fired out a bet, and Auger made the call, The river was the

, and this time, Barbieri check called a bet from Auger. Barbieri showed

for trip aces, and Auger mucked his hand. 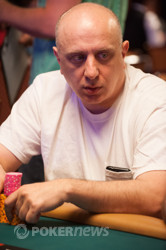 Israel was under the gun, and shoved his last 18,000 into the middle. It folded around to Stephen Hung on the button, and he raised it up. Glenn Engelbert called in the big blind, and they saw a flop of

. Engelbert check called a bet from Hung, and the

hit the turn. Engelbert checked again, but this time, he raised after Hung bet. Hung went into the tank for about 90 seconds before folding, and Engelbert and Israel showed theird cards.

Engelbert had flopped a set, and Israel was drawing dead. The meaningless river was the

Roland Israel has been on a steady decline for the past couple levels, and his stack has dwindled to a mere 18,000. We expect that Israel will be all in any hand now.

Action started with Glenn Engelbert in the hijack, and he raised it up. Jeff Weiss called in the big blind, and the flop came down

. Weiss checked to Engelbert, who fired out a bet. Weiss decided to check raise, and Engelbert put him all in. Weiss made the call, and he was in great shape.

on the turn gave Engelbert an inside straight draw, but the

Donald Auger raised it up, and Al Barbieri three bet on the button. Auger made the call, and the dealer fanned out a flop of

, and Auger check called a bet from Barbieri. The same occurred when the

hit the turn and the

The players are back in their seats, and the cards are in the air again.