Ben Landowski came in for a raise, and Alex Queen three bet in the small blind. It got back to Landowski, and he made the call. The flop came down

, and Queen led out. Landowski raised, and Queen called. Queen would proceed to check call on the turn, the

Not So Sweet for the Sugar Bear

David Arsht brought it in with a raise from early position and cleared the field all the way to Al "Sugar Bear" Barbieri in the big blind. The latter not only called there, but proceeded to check-call bets on the

appeared on the river, Barbieri checked for a third time and Arsht kept the pressure on with a bet. Barberi gave it a little thought but ultimately folded his hand. 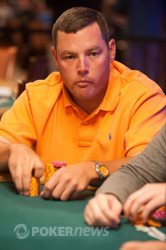 A short-stacked Charles Tucker got his last 38,000 all in preflop with

and was behind the

of Donald Auger. While he had live cards, the

flop was disaster for Tucker as it paired Auger's king. The

turn would leave him drawing dead, and after the

was run out on the river for good measure, he exited in 11th place.

The final ten players are now combining to one table and relocating to the feature table in the Pavilion Room.

Hung Takes a Chunk Out of Israel

Action folded to Stephen Hung on the button and he put in a raise. Roland Israel then three-bet from the small blind and Hung made the call. Israel proceeded to check-call every street as the board ran out

. Israel just rolled his eyes and sent his cards to the muck, dropping to 62,000 in the process.

Action folded to David Arsht in the small blind, and he raised. Charles Tucker three bet from the big blind, and Arsht called. The flop came down

, and Tucker got the rest of his short stack in against Arsht, who made the call.

Despite Tucker having the best hand, Arsht was actually the very slight favorite at 51% according to our odds calculator. The

on the turn kept Tucker out in front, and the 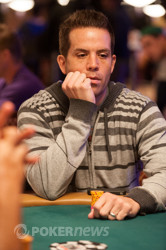 flop, Jared Woodin checked and opened the door for Ben Landowski to bet. Woodin then woke up with a check-raise all in, and Landowski made the call.

Landowski was ahead with two pair, but Woodin had one over with a flush draw. The

turn was of no consequence, which meant Wooden needed either a king or non-eight heart on the river to survive. The dealer burned and put out the

. Woodin shook hands with the victor and then took his leave in 12th place.

Tucker Takes Bite Out of Barbieri

Action started with Charles Tucker under the gun, and he raised it up. Al Barbieri put in a third bet, and everyone folded back to Tucker, who called. The flop came down

, and Tucker check called a bet from Barbieri. The same happened when the

hit the turn, and when the

hit the river, Tucker led out. Barbieri immediately slammed the table and shook his head in disbelief. He leaned back in his chair, and kept shaking his head as he looked up at the ceiling. After about 90 seconds of thought, Barbieri flung the call about 10 feet into the air, and into the middle.

, and Barbieri slammed the table once again, showing 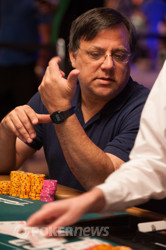 Lori Kirgan raised from early position and was met with a three-bet from Bruce Rosen in the small blind. Kirgan made the call and then fired out a bet when Rosen, who only had 45,000 remaining, checked the

flop. Rosen thought for a minute but opted to conserve his chips and folded.

A few hands later, Rosen raised from early position and was three-bet by Donald Auger. Rosen four-bet to 40,000, leaving himself just 5,000 behind, and Auger called. A bet in the dark saw Rosen call off his last 5,000 on the

flop and the cards were turned up.

Auger had paired his queen to take the lead, which he would not relinquish as the

appeared on the turn followed by the

on the river. With that, Rosen collected his things and exited the tournament area in 13th place.