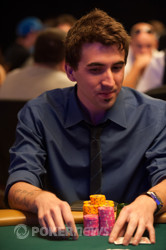 It hasn't been a good day if you were a chip leader in this tournament. We already lost two of our top three stacks entering the day, Ian Johns and Leonid Bilokur, and now, we have lost the other stack, Chris Swan. Swan was crippled just a few hands before, and he raised it up in early position. Stephen Hung reraised, and it was back to Swan. He committed the rest of his 45,000, and Hung tossed in the call.

, and Hung collected the bounty while Swan headed to the payout desk.

Jeff Weiss was under the gun, and he raised it up. Action folded around to Stephen Hung in the small blind, and he reraised. Weiss made the call, and the two went heads up to a flop of

. Hung bet out and Weiss made the call. The

hit the turn, and Hung bet again. This time, Weiss raised, and Hung came along for the river, which was the

for the nut flush, and Hung mucked. 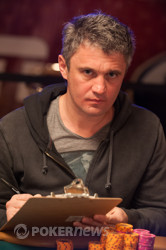 Action folded around to Lori Kirgan on the button and she put in a raise. Leonid Bilokur made the call and then checked the

, which was ahead of Kirgan's

"You did it to me again," Kirgan said in reference to an earlier hand. At that time, the dealer burned and turned the

completed the board on the river and Bilokur was left with 70,000.

A few hands later, Bilokur became involved in a pot with David Arsht. We're not sure of the exact action, but we do know that Bilokur was eliminated on a

board after Arsht revealed

Action folded around to Chris Swan in the small blind and he put in a raise. Glenn Engelbert defended from the big blind and then called bets on both the

for a rivered pair of sevens, which prompted Swan to slightly shift in his chair before showing the

Action started with Jared Woodin, and he raised. Ben Landowski put in a third bet, and it folded back to Woodin. He stuck the rest of his chips in, and Landowski instantly called.

Woodin caught a piece of the flop, as it came down

. He would still need to catch one of the two remaining queens in the deck, and he hit one of them on the turn, the

, and Woodin survived the hand to double up. He has taken full advantage of this blessing, as he has since won a few more small pots to up his stack to 130,000.

On the first hand back from the break, we caught a big hand between Ben Landowski and Chris Swan. The board read

, and Landowski bet. Swan called, and let out a groan of frustration when Landowski showed

The 15 remaining players are in their seats, and the cards are back in the air.

We have two levels in the books, and the remaining players are on their first 20 minute break of the day. 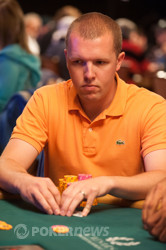 , Lori Kirgan bet from the cutoff only to have Ian Johns put in a raise. The two, who were both short, actually had the same amount of chips, all of which went in after a couple more raises.

Johns was in good shape with his pair of aces, but Kirgan could still make a straight with a ten. The

turn was interesting as it gave Kirgan flush opportunities, but it'd be the

river that'd give he the aforementioned straight and the win.

A disappointed Johns collected his things and made his way to the payout desk in 16th place.