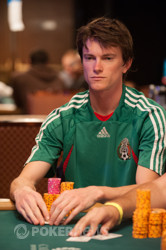 . McGuinness had just 24,000 left, and he bet the first 8,000 in the dark. Israelashvili raised, and Landowski went into the tank. After two minutes of thinking, he folded, and McGuinness committed the rest of his chips, saying "Let's rock and roll!" Israel called, and the cards were flipped.

Israelashvili was out in front, but McGuinness could still pair up to take the lead. The turn was the

, and McGuinness was down to the river. It was the 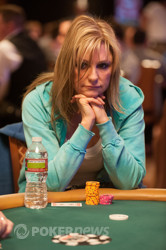 A short-stacked Jennifer Harman got her chips in preflop with

and squaring off against Leonid Bilokur, who held

. It was an old-fashioned flip, and one that didn't come down in Harman's favor as the flop fell

. Bilokur paired his king to take a commanding lead, and Harman was left looking for a queen.

river. Bilokur ended up making a flush, which sent Harman home in 18th place with her first cash of the 2012 World Series of Poker.

Set of Fours Sends Dickerson to the Rail 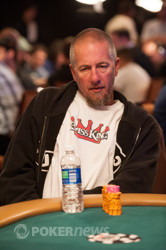 We saw Jed Dickerson on his feet and shaking hands with Bruce Rosen, which was an indicator that he had been eliminated. Sure enough, we made our way over to see Dickerson with

laid out in front of him, which was no good against Rosen's

With Dickerson's elimination in 19th place, we're down to the final 18 players. That means it's time for a two-table redraw!

Kevin McGuinness was down to just 23,000, and he got it in the middle preflop against David Arsht and Lori Kirgan. Arsht and Kirgan checked down the board, which ran out

high, and Arsht said he couldn't beat it. McGuiness tabled 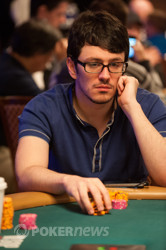 . Al Barbieri checked to his lone opponent Isaac Haxton, who fired out a bet. Barbieri check raised, and Haxton had a decision for all his chips. He made the call, and when the cards were flipped, Barbieri was well out in front.

Haxton could only catch a diamond to survive, and the river brought the

Mesner Runs Into a Flush

board. Glenn Engelbert made the call and showed

A short-stacked Jeff Weiss raised from middle position only to have Lori Kirgan reraise on the button. Both blinds got out of the way, Weiss put in another bet and Kirgan made the call, bringing about the

flop. Weiss bet, leaving himself just 3,000 behind, and Kirgan simply called. When the

Kirgan was left shaking her head as the

appeared on the river, while Weiss smiled and said, "Good time for aces."

Woodin Binks The River To Double Up

Jared Woodin got the rest of his short stack in preflop in the small blind, and Bruce Rosen called in the big blind. Woodin showed

, and Rosen was out in front with

. He stay out in front on the flop,