It too has been a rough day for Jeff Weiss. He came into today as one of the bigger stacks with 171,000, but it has been a downward spiral today. Here's the hand that did most the damage.

Roland Israel raised it up in late position, and Weiss called. David Arsht also called in the big blind, and the flop came down

. Arsht checked to Israel who bet out, and Weiss called. Arsht check raised, and Israel folded. However, Weiss came along. Arsht bet on the turn, the

, and Weiss tapped the tabled before open mucking

That knocked him down to just 12,000, thought he did double up a few hands later. He shoved in the small blind with

, and Jennifer Harman called in the big blind with

. Weiss flopped two pair and held, and he got the first of what will need to be a few double ups if he wants to be a contender again.

Unfortunately we didn't catch the hand, but we can confirm that Eric Blair has been eliminated from the tournament; as such, Al "Sugar Bear" Barbieri has been moved to Table 446 to balance things out.

Donald Auger put in a raise to 12,000 from middle position and was soon met with a three-bet to 18,000 by Jed Dickerson in the small blind. After the big blind got out of the way, Auger made the call and watched the flop come out

. Dickerson wasted little time in putting out a bet, Auger called and the

This time Dickerson slowed down, though he did check-call a bet from Auger. The

river saw Dickerson check for a second time, and he ended up folding when Auger put out a bet.

It was a pretty rough day for Joshua Biedak. He came into today alittle under average with 84,000, but was never able to get anything going. Eventually, Alex Queen raised in middle position, and Biedak called off his last 10,000 in the small blind. Isaac Haxton folded his big blind, and the two flipped their cards.

It was about a good a spot as Biedak could hope for with four high, until the flop came

. This left Beidak with just a five for a straight to win, but the board finished

. Queen won the hand, upping his stack to 160,000, while Biedak left to collect his money.

Eights Into Nines Sends Noori to the Rail

Chris Swan opened for two bets and cleared the field around to Michael Noori in the big blind, who promptly three-bet. Swan, who knew his opponent was short, out in the four-bet and Noori called off his remaining 5,000.

"He's even got a diamond," a resigned Noori said after the

turn gave both players a flush, though Swan's nine was higher. "I still have one out," Noori pointed out in reference to the

. Unfortunately for him, it wasn't in the cards as the

appeared on the river. Noori finished in 24th place and will take home $6,652 for his efforts.

Chris Winchester entered today as the short stack with just 21,000, so we were expecting to see him get his chips in early. Sure enough, we walked to his table and saw that he was all in on a flop that read

against Leonid Bilokur and Donald Auger. The turn came the

Winchester would need an ace or an eight to survive, but the river was the

Action folded around to Ben Landowski in the cutoff and he put in a raise, which was called by Jeff Weiss in the small blind. The latter the check-called a bet on the

flop before check-folding to a bet on the 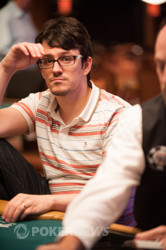 Welcome back to the Rio! We are coming to you live from the Amazon Room for Day 3 of Event 13: $1,500 Limit Hold'em. Yesterday, we knocked the tournament down to just 25 players, and we will hopefully play down to a winner today, though there is a 3:00 AM hard stop in place. Leading the way is Leonid Bilokur, who comes into today with 318,000 in chips. Ian Johns and Chris Swan are nipping at his heels, and there's a few other notable names who still have a shot at the bracelet.

We will be underway in about 15 minutes here. The blinds will start today at 3,000-6000, with the limits being 6,000-12,000. We will be here all day to bring you all the action. Thanks for tuning into Pokernews, and very shortly, we will shuffle up and deal!