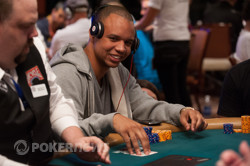 Day 2 of Event 24, the $5,000 Omaha Hi-Low Split 8-or-Better, was a tense one. We began with 184 players left from the starting field of 256. By day's end, only the 27 players who made the money survived. Bubble play lasted for about an hour before James Dempsey departed in 28th place, guaranteeing a $10,348 pay day for the final 27. However, the chip leader couldn't care less about a min cash. Leading the way is none other than Phil Ivey.

Fresh off of two final tables in the last few days, Ivey is back at it again. He spent the beginning and middle portion of the day in the middle of the counts, but contunually increased his stack as player by player busted. When it came to bagging the chips, Ivey had a whopping stack of 446,500. Second in chips is young gun Dan Kelly with 297,000 and Mike Matusow is right behind him with 290,000.

Many big names took part in Day 2, but fell short of the money. Mizrachi brothers Michael and Rob, Allen Bari, John Racener, Phil Hellmuth, and Jason Mercier were among those who busted early on. They were followed out the door by David Bach, Justin Smith, Carlos Mortensen, Todd Brunson, and Mike Sexton in the middle stages of the day.

As play whittled down toward the money we lost Jean-Robert Bellande, Yuval Bronshtein, and Shannon Shorr. Raymond Davis and James Dempsey were both desperately short stacked with 28 players left. Davis found himself all in twice, but managed to chop the first time and scoop the second time to put the pressure on Dempsey.

Unfortunately for the bracelet winner, Dempsey had almost no chance of winning when he committed his chips. The board read

and Bart Hanson held the

in his hand. Dempsey found no miracle running low and exited in 28th place.

Here is the Day 3 table and seat draw:

Play resumes Wednesday at 2:00pm local time and is scheduled to last until only one remains. Be sure to join us then!

Mike Wattel raised to 10,000 from the under the gun position and Bart Hanson made the call. James Dempsey smiled and said, "Please no trips," as he looked down at his cards from the big blind. He put in the call and had just 2,500 chips left behind.

and Dempsey put his last chips in. Wattel gave it some thought and folded after which Hanson called and said, "You're in trouble man".

giving Hanson the win and knocking out Dempsey on the money bubble. We will be right back with the official chip counts and seat draw for the final day!

Some Life For Davis

"I didn't even look," Raymond Davis just shouted after he got his last 9,000 chips into the pot against Brian Hastings.

giving Davis the full pot and another chance at cashing.

We Will Reach The Money Today

The last level of the day is almost over, but we won't stop before the money has been reached. The level will not go up and that means that this could take a while! There are some short stacks, but in this form of poker that doesn't mean as much as in a No Limit game.

From the cutoff Bart Hanson just raised to 10,000 and James Dempsey called from the big blind.

The board came down

and Dempsey check-called all the way.

and he only got a quarter of the pot with his low. Dempsey is now the shortest stack left in the field.

A crucial double up for Michael "Boonie" Kleist has given him a little breathing room. He committed his last chips on a

Kleist, who led the action with betting the entire way to that point, showed

. Brian Hastings, his lone opponent past the turn, immediately mucked his hand. Raymond Davis stayed around until the turn, but folded and is now the shortest stack in the field.