Day 3 Ends with Cassidy and Nguyen Heads Up 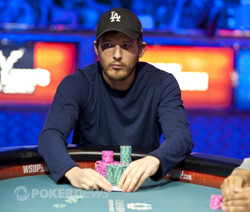 Cassidy has the lead looking for first bracelet tomorrow

Wow, what a crazy day of action again here at the 2012 World Series of Poker. When it all began today at 2:00 PM in Event 24: $5,000 Omaha Hi-Low Split 8-or-Better, 27 players remained and Phil Ivey was the man leading the way. Ivey went on to final table the event, but we'll get to more on him in a bit. First, let's recap the beginning part of the day leading up to the final table.

Raymond Davis was the first player eliminated in 27th place and he was followed by the likes of Matt Lefkowitz (24th), Alex Dovzhenko (23rd) and Stephen Chidwick (22nd). The defending champion, Viacheslav Zhukov, stayed alive all the way until the final 17 players were left, but that's where his title-defense run would end. He finished in 17th place for a very, very solid performance after winning the event last year and took home $13,031. Other notables to bust before the final table were Brian Hastings (16th), Brendan Taylor (13th), Dan Kelly (12th) and Mike Wattel (11th).

When the final table moved to the ESPN Main Stage, it was Joe Cassidy out in front, but only slightly above Ivey. Between the two of them they held about 50% of the chips in play. Joining them under the bright lights and electric atmosphere were Mike "The Mouth" Matusow, Bart Hanson and Scotty Nguyen, amongst others.

Finishing in ninth place was Ryan Lenaghan. He was followed out the door by Matusow and then Hanson went in seventh place. Elie Doft, who happens to be the older brother of Senior PokerNews Reporter Mickey Doft, then fell in sixth place. Gregory Jamison went out in fifth, which set up for a long four-handed battle prior to Meng La falling in fourth.

Three-handed play involved three of the four biggest names to reach the final table in Ivey, Nguyen and Cassidy. At the time the trio began the three-handed action, Cassidy was in front with 1.615 million in chips. He was followed by Ivey's 1.39 million and then Nguyen brought up the rear with 840,000.

Things went back and forth with each player flirting with the chip lead, or holding it, at one time or another. Mainly Ivey and Cassidy were the ones jockeying for the top spot while Nguyen jumped between second and third, for the most part. At one point, it seemed as though Ivey was going to really run away with things, but then following a break, all of the gas seemed to leave his tank. He fell and fell fast, to just a few hundred thousand chips. At points he was even below one big bet, but then miracle upon miracle happened to keep him in the game.

First, Ivey was all in against Nguyen on the

and was in a great spot to scoop Ivey, or at worst get three quarters. Then a turn of the

allowed Ivey to make the same wheel as Nguyen and chop the pot.

, leaving Ivey's full house best and somehow keeping him in the tournament. "Oh my God! Oh my God!" exclaimed Ivey after the hand in about as an exciting an emotion as Ivey could ever get.

After that, Ivey fell again, but was able to run things back up over 800,000. Once again, though, things all went south.

On his final hand, Ivey was all in on the

for two pair. Cassidy held the

kept Ivey in front, but the river

counterfeited Ivey's hand and left Cassidy with the winning two pair — kings and jacks. Ivey was eliminated in third place and took home $136,046 at his third final table of the week.

With Ivey's elimination, Nguyen wanted to stop play for the night as he was tired. Cassidy wanted to keep going, but because the decision to play on wasn't unanimous, things were stopped for the night and the chips were bagged up. Returning on Thursday at 2:00 PM for the heads-up match, Cassidy has an even three million in chips to Nguyen's 845,000. The limits will be 50,000/100,000 for another 20 minutes or so.

That wraps up PokerNews' coverage from the Rio on another great night at the 2012 WSOP. Don't forget to tune back in tomorrow for another great day of poker highlighted by this superstar heads-up match for the gold and $294,777. Until then, thanks for following and goodnight from Las Vegas!

Details to follow, play has been suspended for the night. 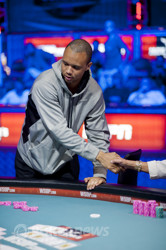 It's all over for Phil Ivey. From the small blind Joe Cassidy raised and Phil Ivey called from the big blind. The flop came down

and Cassidy bet. Ivey raised all in for 95,000 and his opponent made the call.

and Ivey was all in with

ending Phil Ivey's tournament run in third place. We are heads up!

And now the pressure is back on Phil Ivey who just doubled up Scotty Nguyen. Ivey raised from the button and Nguyen called from the small blind. The flop came down

and Nguyen checked-raised Ivey's bet. The call was made and the turn was the

and Nguyen moved all in for his final 40,000 chips. Ivey made the call.

and doubled up after Ivey mucked his hand.

From the button Phil Ivey raised, and Scotty Nguyen three-bet from the small blind. Ivey called.

, Nguyen bet and Ivey called. The turn was the

and Nguyen bet after which Ivey raised all in for 130,000. Nguyen called.

and Ivey found another double up! Nguyen is now the short stack while Cassidy is still miles ahead.

He's still the shortest, but after doubling up twice he's right back in the game. On the first all in he got his 95,000 chips all in pre flop and Scotty Nguyen called.

giving Ivey an epic double up and another chance to fight. Just a few hands later he was all in again.

Joe Cassidy raised from the button and both blinds called. The flop came down

and Ivey lead out. Nguyen folded and Cassidy put him all in. Ivey called and showed

Less Than One Big Bet For Ivey

From the button Joe Cassidy raised it up and both his opponents called. The flop came down

and Ivey bet only to be called by Scotty Nguyen.

and Ivey check-called. The river was the

and and Ivey check-called once more.

and took down this pot. Ivey was knocked down to 65,000 chips after this hand. The very next hand he chopped the low and profited a little since both his opponents called his all in. Ivey is still on the brink of elimination.

Miracle Double Up For Ivey

From the button, Joe Cassidy just raised it up to 200,000, after which Phil Ivey made it 250,000 from the small blind. Cassidy called and the flop came down

"I got a very big hand," Cassidy said as we went to showdown.

and Ivey was looking to hold with his

, and the river the

giving Ivey a full house. Cassidy missed a lot of outs, and Ivey lives to fight another day.