Small One For Rice

Sean Rice raised preflop and was three-bet by Ian Johns. Action folded back around to Rice who threw in a call. The dealer rapped the table and brought forth a flop of

. Rice checked to Johns who flicked out a call. Rice called and both players were off to fourth.

and Rice took this opportunity to bet. Johns called and the

came on the river. Rice bet and was called once more. Rice flipped up

for a flush and Johns mucked his hand.

Brian Meinders has just taken down a few extra chips early, with a recent hand seeing him, Preston Derden and Victor Ramdin taking to a

flop in a raised pot. On the flop, Ramdin and Derden checked to Meinders and he fired out a bet. Both players called and a

turn was dealt. Both players again checked and Meinders flicked out another bet. Derden got out of the way here and Ramdin called.

completed the board on the river, both players opted to check at which point Ramdin said, "ace-high." Meinders then tabled his

and Ramdin's cards went into the muck.

and raked in the blinds.

Action folded around to Preston Derden who raised. Right behind him, Christopher Hartman tossed out a three-bet only to find Brock Parker four bet the action. Derden and Hartman both called and the three players were off to the flop.

and both players checked to Parker who continued out with a bet. They both called and the

came on the turn. All three players opted to check this betting round and the

Derden and Hartman checked to Parker who tossed out one last bet. Derden called and Hartman folded his hand. Parker showed

for Broadway which was way ahead of Derden's

. Parker was able to drag in a nice pot early with this hand.

Here is quick rundown on the first three hands that played out here at the final table.

The players have been introduced and are ready for limit hold'em action. By the end of the day we will have a new gold bracelet winner here at the 2012 World Series of Poker. Let's go! 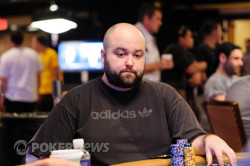 Since each remaining player has bested two tables of limit hold'em action, the remaining ten are guaranteed at least $7,164.

Leading the way today is Victor Ramdin who is looking for his first WSOP bracelet. Ramdin conquered a stacked table yesterday that included the likes of JJ Liu and Greg Mueller. Ramdin was then able to come out on top in a grueling heads up match against Justin Bonomo to secure his seat today.

Also in the hunt today is Brock Parker, who has officially secured his third cash of the series. Parker has a 4th place finish under his belt this year, making it to the semi-finals of Event 12: $10,000 Heads-Up No-Limit Hold'em.

Play will begin today with limits at 3,000/6,000 and we will play down to a winner. Stay tuned here on PokerNews as we provide you with all of the latest updates as these ten players attempt to become a WSOP champion.