Two Hands to Square One

Brian Meinders just took down a pot and then within a minute's time, Darin Thomas had done the same.

Thomas Starting to Close the Gap

We caught up with the two players on a board of

. Brian Meinders checked to Thomas who fired out a bet. Meinders raised but quickly found himself faced with a three-bet from Thomas. Meinders called and Thomas showed

for fours full of aces.

A dejected Meinders flung the

, the last remaining four in the deck to the felt and mucked his other card. Thomas is now sitting on about 530,000.

A huge hand just played out where Darin Thomas had the majority of his chips in the middle against Brian Meinders. It was three-bet preflop and a

On the river, Meinders led out again and Thomas raised it up. Meinders gave a shrug as he made the call and the two players turned their hands over.

Thomas had Meinders up until the river, and if it fell differently, may have doubled-up. However, a split pot wasn't the worst case situation as he is still in this tournament and in with a chance of taking it down.

Thomas Gets One Back 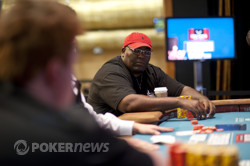 flop was spread out when Darin Thomas led with a bet. Brian Meinders then made it two to go and Thomas made the call. A

on the turn would see Thomas lead and this time Meinders would simply call. The

was the last card to hit the board and again Thomas would lead out. Another call from Meinders and Thomas would turn over his

, which would award him the pot.

The lead that Brian Meinders holds over Darin Thomas is growing larger at the moment, with another pot going the way of Meinders. In this hand, it was a raised pot that saw a

, enough to rake in the pot.

Darin Loses Some Back

flop hit the felt. Meinders led here and Thomas raised. A call from Meinders and the

would hit the turn. This time Meinders checked and then raised when Thomas fired out a bet. Meinders made the call and a

landed on the river. It is here that Meinders led and then Thomas thought for some time before letting it go, sending the pot to Meinders.

flop came and Thomas bet. Meinders called and the

was on the turn. Thomas bet out and Meidners put out a raise. Thomas opted to three-bet and Meinders slowed down by calling.

and Thomas put out one more bet. Meinders called but mucked his hand when Thomas flipped up 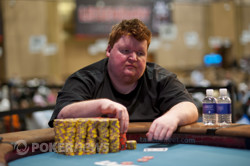 Brian Meinders has been catching the right cards at the right time here, with another handy pot going his way. A recent hand saw Meinders holding

and after rumbling on each street of a

board, Thomas' hand went straight into the muck and Meinders took down the pot.

Brian Meinders has taken down a couple of pots recently, with the largest of them going like this. Darin Thomas opened the button and Brian Meinders raised it up. Thomas called and a

flop was dealt. Meinders led and received a call, which was the same result as the turn (

river, Meinders again fired out, but this time Thomas let his hand go and Meinders took it down.