Thomas Gets It Back 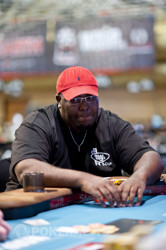 Darin Thomas popped it up from the button and Brian Meinders called. The

flop was spread in front of the two and Meinders led out into Thomas. Thomas called and the two saw the

turn. Once again Meinders fired and was called by Thomas.

Meinders opted to check the

for a diamond flush that was good enough to drag the pot.

Darin Thomas started the heads-up battle strong, managing to take down a few small pots. That continued to be the case until Brian Meinders picked off a couple of hands. The first nice pot that Meinders took down saw him too strong holding

board, with the flush scooping up the pot.

A couple of hands later and Meinders would be taking it down again. This one started when Meinders opened it up from the button. Thomas three-bet and Meinders called as a

flop hit the felt. Thomas led and Meinders called. The

). This time when Meinders bet, Thomas would let his hand go, sending the pot to Meinders. 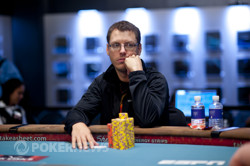 Christopher Vitch opened with a raise from the button and Darin Thomas three-bet from the big blind. Vitch pushed out a four-bet and Thomas raised to put Vitch all in.

and Vitch was in need of either a king or a five to stay alive. The deck refused to oblige, however, with the turn coming

Christopher Vitch has played a couple of pots here after the break and lost both of them to take a fair chunk out of his stack. A recent hand saw Brian Meinders open the button and Vitch call out the of the big blind. The two players then checked on the flop and turn of a

board. On the river, Meinders fired out a bet and Vitch thought long and hard before opting to let his hand go. Vitch now has less than 100,000 chips

The three players are back from their dinner break and ready to play down to a winner.

Players are now on a 60-minute dinner break. The final three will return in an hour to duke it out for a World Series of Poker bracelet.