Christopher Vitch has been bleeding a few chips of late, while Brian Meinders is still right up there with the lead. Darin Thomas is doing better than when three-handed started. 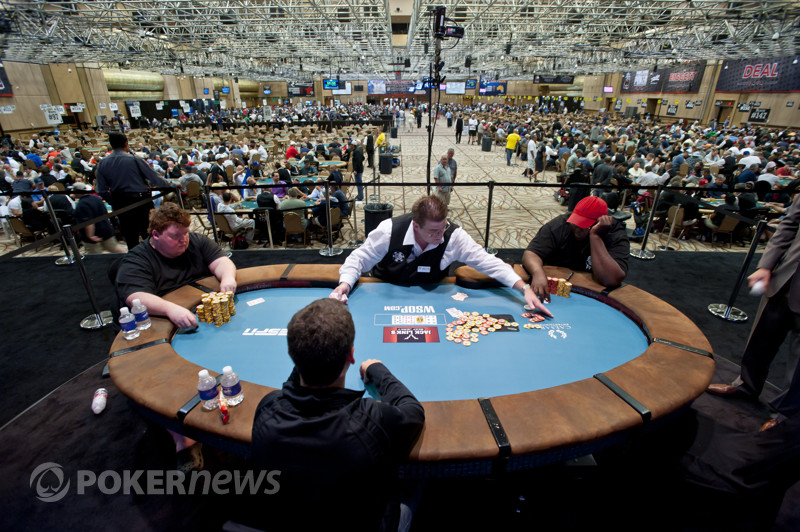 Darin Thomas and Christopher Vitch took to a

flop, where Thomas led out with a bet. Vitch made the call and an

fell on the turn. This time both players checked and the dealer readied the final card for the board.

Thomas fired back up here, flicking out a bet. Vitch opted to make the call and then mucked his hand when Thomas tabled

Darin Thomas has been relatively quiet of late, letting Brian Meinders and Christopher Vitch fight it out for the chips. Meinders and Vitch recently played another pot together that went like this.

Vitch opened it up from the button and Meinders made it two bets from the small blind. Thomas got out of the way and a

flop appeared on the felt. Meinders led here and Vitch made the call. Both players then checked the turn (

At showdown, Vitches' king-high was too strong for Meinders' ten-high as Vitch took down the pot.

Brian Meinders and Christopher Vitch took to a

flop and it was Vitch to act first, with a tap on the table sending the action to Meinders. A bet from Meinders and a call from Vitch would send a

out onto the felt on the turn. This time when Vitch checked and Meinders bet, Vitch would make it a check-raise. A call from Meinders and the final card would be dealt on the river.

This time Vitch would lead out with a bet and Meinders would quickly fold his hand to send the pot to Vitch.

Time to Slow Down

There has been three walks during the last batch of hands. With so many eliminations coming in such a short amount of time, it seems like the players are maybe finally slowing down. 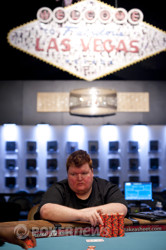 Brian Meinders has just taken down a fair sized pot, with the hand playing out like so. Chris Vitch opened it up from the button and Mienders made it three bets to go in the small blind. Darin Thomas then put in a fourth bet from the big blind and with two calls, three cards would be dealt on the felt.

Meinders checked up front and Thomas fired out a bet. Vitch then made it two to go, at which point Meinders check-raised, making it three bets to go. Thomas let his hand go and Vitch made the call.

turn would see Meinders lead out this time and with a call from Vitch, the

would complete the board on the river. This time both players checked and Meinders turned over his

, with the pair of aces enough to take down the hand.

Darin Thomas has been taking down a few pot recently, first managing to make a broadway straight against Christopher Vitch and then playing out the following hand.

Folded to Thomas in the small blind, he made it two bets to go. Vitch called out of the big blind and a

flop was dealt. Thomas quickly fired out a bet and Vitch flicked out the call. The

turn and again Thomas would fire out a bet, except this time Vitch didn't want anything to do with the hand as Thomas raked in the pot. 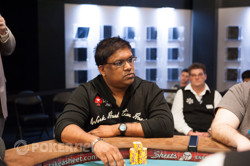 Victor Ramdin has had a swingy last level and that swing has seen him fly straight out of this tournament in 4th place.

The last hand of Ramdin's tournament began when he raised the cutoff. Brian Mienders raised it up in the big blind and Ramdin made the call.

On the flop, Meinders led out with a bet and Ramdin raised it up, leaving himself with just a big bet and a touch more. Mienders then raised it and very suddenly, Ramdin had the remainder of his chips in the middle.

"I need a ten," said Ramdin as he tabled his

He wasn't completely dead to ten though, with Meinders holding just

river hit the felt, it was all over for Ramdin.

A short-stacked Victor Ramdin raised and it folded to Darin Thomas in the big blind. Thomas pushed out a three-bet and Ramdin moved all in for his last 40,000.

Thomas found a bit of help on the flop of

, still needing another nine or deuce to eliminate Ramdin. Ramdin drilled the

on the turn though, guaranteeing his double up. The

fell on the river and Ramdin's jacks full of deuces was enough for a double up.