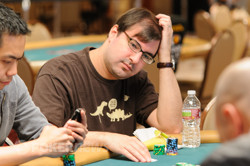 After a rather short day of poker, fifty players were able to conquer their tables and move on to Day 2 of Event 25: $1,500 Limit Hold'em Shootout. Each player to move on to play tomorrow is guaranteed to win at least $3,088. If the players can best their table tomorrow, they will make the final table of ten and be guaranteed even more money.

Today's play saw a slew of notable players enter only to hit the rail a few levels later. Among those to try their best but come up short today were Daniel Negreanu, Jennifer Harman, Antonio Esfandiari, Phil Hellmuth, Brandon Cantu, Marcel Luske, and Joseph Cheong.

While those players busted from their tables while there were still a few players left, several notable players made it to heads up only to end their tournament life one spot from the money. Barry Greenstein, Bryan Devonshire, McLean Karr, Maria Ho and Viktor Blom are some of the players who were able to make it to heads up but were unable to seal the deal.

While only fifty players progressed through Day 1, many notable names still survived. Those coming back for round two tomorrow include Victor Ramdin, Mike Leah, Justin Bonomo, JJ Liu, Ari Engel, Brock Parker, and many more.

Also to return tomorrow is Matt Matros. Matros recently won his third World Series of Poker bracelet when he defeated Mark Radoja heads up in Event 16: $1,500 No-Limit Hold'em - Six-Handed. This marks the third consecutive year that Matros has won a gold bracelet, and tomorrow he will return to try his hand at bracelet number four.

Rounding out the notable names to return to the felt tomorrow are Greg "FBT" Mueller and Scott Seiver. Mueller and Seiver both made a deep run earlier in the series during Event 9: $1,500 No-Limit Hold'em Re-Entry. Seiver finished a modest 17th place while Mueller was able to make the final table, ultimately finishing in seventh.

Tomorrow players will return to play 10 five-handed tables. The winner of each table will go on to the final table where the final ten will be guaranteed a cash prize of at least $7,164. Cards will be in the air at 1:00 PM local time and we'll be here to provide you with all of the latest coverage. Until tomorrow!

Couden Last Victor of the Day

Joey Couden has become the last person to beat his table and progress to Day 2. Couden is guaranteed $3,088 in prize money and will be taking 34,700 into play tomorrow.

. Zewin retained the lead through the

peeled off on the river, sealing his opponent's fate and guaranteeing Zewin a spot in the money. Zewin will be bringing 31,000 with him to Day 2.

Todd Jackson got his opponent all in before the flop holding

. Jackson's opponent was dominating, holding the

and Jackson was able to claim victory over his table. He will be returning for Day 2 with 31,400 in chips.

Chris Hartman has just bested his opponent, making him the next player to move on to Day 2. Hartman will take 31,200 with him.

With Hartman's victory, three tables are now left playing in the Brasilia room.

Thomas Corrigan is the next player to move on to play tomorrow. He will be bringing a stack of 31,300 with him.

Omar Mehmood is the next player moving on to tomorrow with 31,300 in chips. With his victory, we are down to the final five tables of the night.

Limit hold'em master Mike Schneider is no long with us in this tournament. Schneider, who took sixth in this event in 2010, was just eliminated by Roland Israelashvili. With that, we're down to the final six heads-up matches in the Brasilia Room.